“In this case, though in the sanction order it has been recorded ‘by order’ but from that word it cannot be inferred by whose order.”

Tripura High Court: The Bench of S. Talapatra, J. set aside the conviction of the appellant (who was a Member of Tripura legislative Assembly at the relevant time) for an offence under Section 500 IPC (punishment for defamation) for want of necessary sanction.

The appellant had made scathing and unfounded allegations of corruption against the de facto complainant– Manik Sarkar (who was the Chief Minister of Tripura at the relevant time) at a public meeting which were published in a daily newspaper–Tripura Darpan. He alleged the CM of secretly purchasing a luxurious flat at Salt Lake and keeping the toiling masses hungry. In a letter to the appellant, the CM challenged him to prove the allegations within 48 hours. However, the appellant neither replied to the letter nor proved any allegations. Subsequently, the Public Prosecutor, West Tripura filed a complaint against the appellant under Section 199(2) CrPC for taking cognizance, enquiry and trial for committing the offence under Section 500 IPC. Ultimately, the matter went to trial and the appellant was convicted and awarded a sentence of 2 day’s simple imprisonment by the Sessions Judge. Aggrieved thereby, the present appeal was filed.

Senior Advocate P.K. Biswas, representing the appellant, contended that the conviction was not proper as there was no legal sanction order to file a complaint against the appellant who was a sitting MLA at the relevant time. Advocate General A.K. Bhowmi made submissions in favour of the impugned judgment.

The High Court found that the charge against the appellant was established and proved to the hilt. However, thereafter it referred to a plethora of precedents on law relating to Article 166 which has been engrafted for conduct of the business of State Governments. The article mandates that all executive actions of the government have to be taken in name of the Governor and authenticated in a manner specified by rules in that behalf. In the present case, the order of sanction was not issued in name of the Governor nor was it shown to have been issued by his order. Even after perusing Rules of Executive Business of the Government of the State of Tripura, 1972, the Court found the absence of authorisation for granting sanction as required under Section 199(4) CrPC. In such case, it was held that the cognizance or framing of charge on the absence of valid sanction was grossly erroneous and illegal. As a corollary, the appeal was allowed and the appellant was discharged. [Bilal Miah v. State, 2019 SCC OnLine Tri 4, dated 03-01-2019]

No firecracker sale in Delhi-NCR this Diwali; Ban to continue till Nov 1 [Full Report]

Whether conducting a Test Identification Parade after a lapse of a long time, will serve any purpose or not? Karnataka HC answers in negative

Reported By Editor Published on October 1, 2022 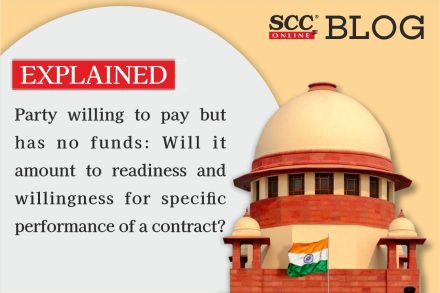 Explained| Party willing to pay but has no funds: Will it amount to readiness and willingness for specific performance of a contract?

Reported By Editor Published on September 7, 2022