Madras High Court: A  Bench of Dr S. Vimala, J. addressed a writ petition in which it was stated that petitioner was charged with corruption and put on suspension for which no order has yet been passed in a period of 9 years.

The petitioner in the present case was working in TANGEDCO and was placed under suspension on charges of corruption. For the said charge, a criminal case was filed but after a lapse of even more than 9 years, no order has been passed by the respondents and the grievance of the petitioner for the said issue is that his suspension is prolonged for which he has made a representation seeking to reinstate him in service.

Learned Counsel for the petitioner Mr Ravi Anantha Padmanaban contended that the prolonged suspension was against the decision of the Supreme Court in Ajay Kumar Choudhary v. Union of India, (2015) 7 SCC 291, which held that:

Thus, the High Court on perusal of records and the decision of the Supreme Court placed above held that the order of suspension be revoked and the respondents were directed to reinstate the petitioner in service and post him in any non-sensitive post. The petition was disposed of accordingly. [S.P. Chandrasekar v.  TANGEDCO, 2018 SCC OnLine Mad 3607, Order dated 04-12-2018] 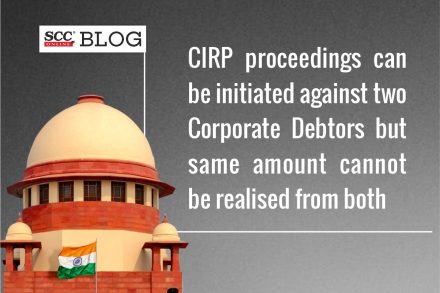 IBC| CIRP proceedings can be initiated against two Corporate Debtors but same amount cannot be realised from both: Supreme Court

By Prachi Bhardwaj Published on October 4, 2022

SL SC | Maintenance criteria can be altered depending on change in circumstances; Court dismisses the appeal