The penalty was imposed on the company and its Directors for defaulting in filing the annual return in time which attracted punishment under Section 92(5) of the Companies Act, 2013. Also, for violation of Section 137 as financial statements adopted in the annual general meeting was not filed with Registrar of Companies, punishment under Section 137(3) was attracted. The Registrar of Companies had proposed a penalty of Rs 10,64,000 on the company and Rs 10 lakhs on each of the Directors. On appellants’ (three Directors of the company) application under Section 441 for compounding of offences, the NCLT  reduced the amount of penalty to Rs 3 lakhs both for the company as well as each of the three Directors. The instant appeal was filed against this decision of NCLT for further reduction in penalty/compounding of the offences.

The Appellate Tribunal noted the submission made by the appellants the company and the Directors were not in a position to pay Rs 3 lakhs as their financial condition was not sound. In view of such submission, the Appellate Tribunal asked the Company Secretary concerned to file the statement of accounts of the Directors to support such a plea. However, the appellants did not want to disclose the respective amount available in their accounts. In such circumstances, it could not be believed that the appellants were not in a position to pay the amount or that they were bankrupt. This apart, as the NCLT had already reduced the amount of the penalty proposed by the Registrar of Companies which was just and fair, the Appellate Tribunal was not inclined to interfere in the order impugned. The appeal was dismissed holding it to be sans merit. [S.D. Bio-Tech Ltd. v. Registrar of Companies, Company Appeal (AT) No. 35 of 2018, dated 30-01-2018]

[JJ Amendment Act, 2021] Bombay High Court stays the change of exclusive jurisdiction over all adoptions including foreign adoptions from Courts to DM

SEBI | Without going into merits, adjudication proceedings abated considering the death of the Noticee 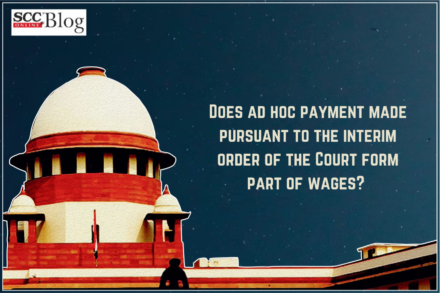