Punjab and Haryana High Court: In this case, two revision petitions were disposed of together by a Single Judge Bench comprising of Anil Kshetarpal, J., where issues were identical.

This revision petition was filed against an order where application for rejection of plaint was dismissed. The Plaintiffs were alleged with not signing the documents of guarantee. The plaintiff had approached the Civil Court in the matter related to SARFAESI Act, 2002 where according to Section 17 of the Act any person affected is entitled to file an application before the Debt Recovery Tribunal (DRT). In pursuance of Section 34 of the Act which bars Civil Court’s jurisdiction in matters covered under SARFAESI Act, defendant i.e. Nationalized Bank pleaded that Civil Court had no jurisdiction. Trial Court referred the case of Mardia Chemicals Ltd. v. Union of India, (2004) 4 SCC 311 where it was held that in cases of fraud, Civil Court does have jurisdiction.

This Court observed that the pleadings of the plaintiff suggests that the word fraud had been deliberately used so as to oust the jurisdiction of Debt Recovery Tribunal and in a decision of Madras High Court V.Thulasi v. Indian Overseas Bank, 2011 SCC OnLine Mad 670 it was held that where it is found that the word fraud has been deliberately used as a clever drafting in order to bring the suit before Civil Court such efforts will be repelled by the Court. High Court enabled the DRT by virtue of provisions of SARFAESI Act, 2002 to deal with the issue of whether the plaintiffs had stood guarantee to the loan received by the borrowers or not. Therefore, both the revision petitions were allowed and the matter will be taken up by the DRT. [State Bank of Patiala v. Satya Jyoti Rice Mills,2017 SCC OnLine P&H 4657, order dated 02-11-2017]

J&K and Ladakh HC dismisses quashment petition of a person accused of causing detention of detenue by BSF due to personal enmity; allows bail application 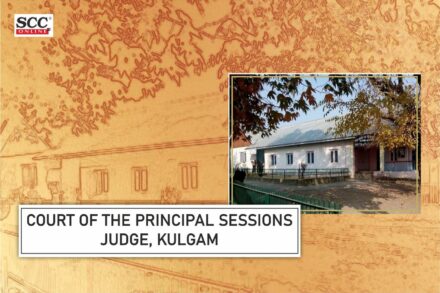 Anti Vaxxers need to be treated strenuously with an iron hand; Such haters do not deserve concession of anticipatory bail, their free movement and free speech is a threat to society at large: J&K Sessions Court