Allahabad High Court: A Single Judge Bench comprising of Ashwani Kumar Mishra, J., allowed a writ petition directed against the order passed by the Additional Superintendent of Police, whereby payment of compensation consequent upon the death of petitioner’s husband was rejected.

Husband of the petitioner was a Sepoy in 36 Rashtriya Rifle (Garhwal Rifle), Indian Army. He was posted in Gurez Sector, J&K. On the fateful day, the deceased was travelling in the army truck which fell in a gorge, resulting in his unfortunate death. The petitioner moved an application for grant of compensation in terms of the policy framed by the State. The claim of the petitioner was rejected vide the impugned order, on the ground that death of the petitioner’s husband was not caused during the course of employment.

The High Court perused the said policy of the State, and after considering the facts, held that the impugned order was liable to be dismissed. It was held that the petitioner’s claim was covered under the Government Order that contained the said policy. It was an undisputed fact that the deceased was travelling in army truck while on duty, which fell in the gorge. The deceased was posted at the place where the accident happened. The Court held that the deceased was a serving soldier who died while on duty. In such circumstances, it was not justified to hold that petitioner’s claim was not covered under the said policy. Accordingly, the impugned order was set aside and the respondent was directed to pass a fresh order on the petitioner’s application. [Dimple Yadav v. State of U.P.,2018 SCC OnLine All 1018, dated 18-07-2018] 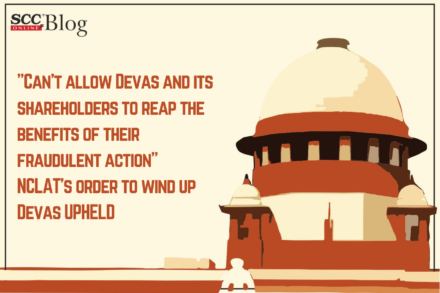 “Can’t allow Devas and its shareholders to reap the benefits of their fraudulent action”; SC upholds NCLAT’s order to wind up Devas