Narcotic Drugs and Psychotropic Substances Act, 1985 — Ss. 8(c), 20(b)(ii)(C), 28/23 and 67 — Search and seizure: In this case there was alleged recovery of contraband from suitcase. Statement of official witness, found impaired due to infirmities, not safe to rely upon and pass conviction order. Statements of independent panch witnesses, depicted a different picture than one portrayed by official witness, as to recovery and seizure. As recovery of narcotic substance was not proved beyond reasonable doubt, reversal of conviction by High Court was confirmed. [Union Of India v. Leen Martin, (2018) 4 SCC 490]

Criminal Procedure Code, 1973 — S. 125 — Maintenance — Grant of: Grant of Maintenance was set aside by High Court, on ground that appellant failed to prove that she was wife of respondent. Claim of appellant was that respondent had fathered three children with her, which was denied by respondent. Parties were directed by Supreme Court to go for DNA test. As DNA test report established that respondent was father of three children born to appellant, hence, impugned order of High Court, was set aside and order in favour of appellant under S. 125 CrPC, granting maintenance @ Rs 4000 p.m. from the month of September 2013, restored. [Pratima Das v. Subudh Das, (2018) 4 SCC 528]

Right to Information Act, 2005 — Ss. 3, 4, 6, 8, 9 and 11 r/w Third Recital of Preamble — Exemption from giving information: While balancing right to information, public interest including efficient working of Government, optimum use of fiscal resources and preservation of confidentiality of sensitive information has to be balanced and can be guiding factor to deal with given situation dehors Ss. 8, 9 and 11. [UPSE v. Angesh Kumar, (2018) 4 SCC 530]

Kerala Education Act, 1958 (6 of 1959) — S. 15 — Taking over of schools in public interest and in interest of education: Notification under S. 15 issued after closure of schools but satisfaction under S. 15(1) which was made prior to closure, valid. Submission that schools having already been closed and that too as per directions of Court and having attained finality in Supreme Court, State Government could not have issued belated notification under S. 15, not tenable. [A.A. Padmanbhan v. State of Kerala, (2018) 4 SCC 537]

Motor Vehicles Act, 1988 — Ss. 166 and 163-A — Permanent total disability — Compensation — Computation of Income — Loss of future prospects — Self-employed carpenter: Claim of appellant carpenter that his earnings were Rs 6000 p.m. cannot be discarded or cannot be regarded as being unreasonable or contrary to a realistic assessment of situation on date of accident. Following five-Judge Bench in Pranay Sethi, (2017) 16 SCC 680, held that benefit of future prospects should not be confined only to those who have a permanent job and would extend to self-employed individuals. In case of a self-employed person, an addition of 40% of established income should be made where age of victim at time of the accident was below 40 yrs. Hence, in this case, appellant be entitled to an enhancement of Rs 2400 towards loss of future prospects. [Jagdish v. Mohan, (2018) 4 SCC 571]

Constitution of India — Arts. 139-A, 136 and 226 — Transfer of writ proceedings to Supreme Court: In this case transfer petitions were dismissed on the ground that issue involved were pending consideration in a civil appeal in Supreme Court. Decision of Supreme Court can be brought to notice of High Court once civil appeal decided by Supreme Court and parties in meantime can request High Court to defer proceedings in pending writ petitions. [Commr. of Service Tax (Appeals 1) v. Sri Selvaganapathy & Co., (2018) 4 SCC 578]

Criminal Procedure Code, 1973 — Ss. 154, 200 and 482 — Second FIR and Counter-complaint — Maintainability of — Second FIR — When can be lodged: In this case two FIRs were filed in relation to same offence and against same accused but second FIR was not filed by same person, who filed first FIR . Moreover, second FIR contained a different version of events than contained in first FIR. While determining that whether subsequent FIR is liable to be quashed or not, the Supreme Court held that High Court committed jurisdictional error in quashing subsequent FIR/charge-sheet under S. 482 CrPC, without adverting to law on subject. Impugned order was set aside and case was restored to its file for being tried on merits, in accordance with law. [P. Sreekumar v. State of Kerala, (2018) 4 SCC 579]

Civil Procedure Code, 1908 — Or. 12 R. 6 — Judgment on admission — When proper: In this case, Defendant 2 (Bank) in written statement not specifically denied undertaking to honour cheques issued by Defendant 1 but deliberately attempted to frustrate legal right of plaintiff by producing only a xerox copy and not original undertaking. Trial court in said suit for recovery allowed Or. 12 R. 6 application of plaintiff. The said order was affirmed by the Supreme Court. [Indian Bank v. S.N. Engineers & Suppliers, (2018) 4 SCC 606]

Criminal Procedure Code, 1973 — Ss. 205, 317 and 482 — Personal appearance of accused — When can be exempted — Case under S. 498-A IPC and S. 4, Dowry Prohibition Act: When sufficient grounds made out for granting exemption from personal appearance of accused persons in trial, Judicial Magistrate committed error in not adverting to such grounds and rejected application filed under S. 205 CrPC, on unfounded reasons. Challenge to sais order, before High Court, under S. 482 CrPC, was also incorrectly rejected, on some different reasonings and High Court took entirely new grounds for dismissing application filed under S. 482 CrPC without adverting to grounds which were taken by Magistrate for declining prayer. Orders of High Court and Judicial Magistrate, set aside and personal appearance of accused, exempted. [Rameshwar Yadav v. State of Bihar, (2018) 4 SCC 608]

Constitution of India — Art. 226 — Condonation of delay — Adoption of liberal approach in respect of, when warranted: A defective review petition was filed in High Court but petitioners concerned failed to cure those defects despite several opportunities granted to them in that regard. Review petition was consequently dismissed by Registrar of High Court. Application was filed before High Court for setting aside the order of Registrar and restoring the review petition, which was dismissed on ground of delay. While hearing the petition challenging the said order, the Supreme Court noted that keeping in view the observations made by Supreme Court in Sangram Singh, AIR 1955 SC 425 and having regard to the nature of controversy involved herein, held, High Court should have condoned the delay taking a liberal view in the matter. Interest of justice demanded one more opportunity to be given to the review petitioners (appellants herein) to cure the defects. [Pralhad Shankarrao Tajale v. State of Maharashtra, (2018) 4 SCC 615]

Constitution of India — Art. 233 — Appointment to Higher Judicial Service — Appointment to post of District Judge — Eligibility: Matter referred to larger Bench on issues: (i) whether eligibility is to be adjudged only at time of appointment or at time of application or both; and (ii) whether in computing period of 7 yrs of practice for being eligible for appointment as District Judge, period during which candidate has held judicial office to be included and interpretation of Art. 233 of the Constitution. [Dheeraj Mor v. High Court of Delhi, (2018) 4 SCC 619]

Constitution of India — Arts. 233 and 309 — Appointment to posts of Higher Judicial Service — Rr. 31(3) and 33(iii) of Rajasthan Judicial Service Rules, 2010 — Validity: For appointment to posts of District Judges in State of Rajasthan, Rules were framed by certain States including State of Rajasthan and State of Gujarat in exercise of their powers under Art. 309 of the Constitution that in computing period of 7 yrs of practice by candidate for appointment to post of District Judge, period during which candidate was holding judicial office would also be computed. Interim orders were passed by Supreme Court in two writ petitions pertaining to appointment to Higher Judicial Service wherein benefit similar to one extended by State of Gujarat was claimed. In this case, it was prayed to pass similar orders while declaring impugned Rules requiring a candidate to have not less than 7 yrs of practice for being eligible for appointment to post of District Judge in State of Rajasthan. The Supreme Court held that impugned Rules are in consonance with Art. 233 of the Constitution. However, considering that validity of Rules framed by State of Gujarat had not been tested so far and to avoid proliferation of litigation, matter referred to larger Bench. [Sukhda Pritam v. High Court of Rajasthan, (2018) 4 SCC 627]

Rent Control and Eviction — Allotment/Deemed Vacancy/Vacancy/Release of Building — Review power under S. 16(5)(a), U.P. Urban Buildings (Regulation of Letting, Rent and Eviction) Act, 1972 — When can be exercised: If District Magistrate returns a wrong finding regarding vacancy, it is always open to him to review same. Question of allotment or release under S. 16(1)(a) or (b) can arise only if there is a vacancy. Once finding that there is no vacancy, same certainly open to be reviewed under S. 16(5)(a), 1972 Act. Thus District Magistrate was justified in exercising review jurisdiction. [Rajendra Kumar Verma v. Additional District Magistrate (Civil Supplies), (2018) 4 SCC 630]

Karnataka Value Added Tax Act, 2003 (32 of 2004) — Ss. 4(1)(a) and 4(1)(b) — Rate of tax on goods used in the execution of works contract prior to 1-4-2006 i.e. prior to insertion of cl. (c) in S. 4(1) prescribing a uniform rate of tax on such goods — Determination of: The expression “other goods” means those goods which are not governed by S. 4(1)(a) and where goods are specifically covered by any of the entries of the Second, Third and Fourth Schedules, such goods would be covered by the specific entry relating to those goods. Thus, recourse to the residual provisions of S. 4(1)(b) would be available only in respect of “other goods” i.e. goods which did not fall within the purview of S. 4(1)(a). Further, though it was permissible for the State Legislatures to prescribe a uniform rate of tax for all goods involved in the execution of works contracts, the KVAT Act, 2003 did not provide a uniform rate of tax prior to 1-4-2006. Therefore, tax prior to 1-4-2006 was to be levied as per the rate applicable on the value of each class of goods involved in the execution of works contract. [State of Karnataka v. Durga Projects Inc., (2018) 4 SCC 633]

Constitution of India — Arts. 145(3) and 136 — Ram Janmabhoomi/Babri Masjid suits — Issue as to whether matter should be referred to Constitution Bench: Directions regarding completion of procedural formalities with regard to addition, deletion, substitution of parties and submission of documents and translated copies of documents, issued. [M. Siddiq v. Mahant Suresh Das, (2018) 4 SCC 655]

Service Tax (Determination of Value) Rules, 2006 — R. 5 — Validity of: As per the charging section i.e. S. 66 of Finance Act, 1994, service tax is to be charged only on the value of taxable services. Further, as per S. 67 of Finance Act, 1994, for valuation of taxable services, the authorities are to find what is the gross amount charged for providing “such” taxable services. Thus, any other amount which is calculated not for providing such taxable service cannot be a part of that valuation. Further, rules cannot go beyond the statute i.e. a rule which comes in conflict with the main enactment has to give way to the provisions of the Act. Therefore, service tax is to be paid only on the services actually provided by the service provider i.e. R. 5 is ultra vires the provisions of Ss. 66 and 67 of Finance Act, 1994. [Union of India v. Intercontinental Consultants & Technocrats Private Ltd., (2018) 4 SCC 669] 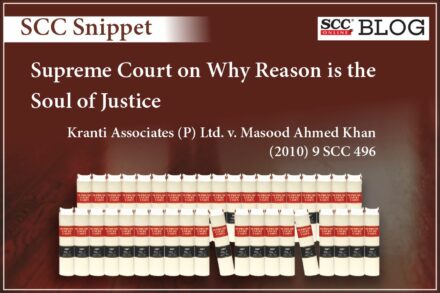