Allahabad High Court: The petitioner challenged his transfer order in State Government’s Department of Medical and Health alleging the order to be illegal and arbitrary passed against him on extraneous considerations as well as without application of mind. The petitioner prayed for a relief in the nature of writ of mandamus to direct the respondent to let him work continually on his earlier post.

The petitioner further alleged that order of posting is legally not sustainable in view that he is currently working as level-III Medical Officer and by that, he is legally entitled to be posted as Superintendent at Community Health Centre as per the 2016 government order whereas the petitioner is transferred out of his cadre. The petitioner also alleged that he was not posted because of any administrative exigency. On the other hand, the counsel for the respondent argued that the petitioner had various complaints against him of not behaving well with fellow officers and subordinate staff as well as allegation of bribery.

The Division Bench consisting of Narayan Shukla,J. and Virendra Kumar-II, J. after taking into account all the evidence came to the conclusion that the petitioner vide impugned transfer order has been posted at Headquarter on administrative exigency and after observations of his defective way of working and conduct of indiscipline. The Court held that petitioner has no enforceable right to remain posted at any particular post and moreover, in this case, it observed that he has moreover been transferred on administrative grounds. Accordingly, the petition was dismissed. [Dr. Manoj Kumar Gupta v. State of U.P.,  2017 SCC OnLine All 2400, decided on 1.09.2017] 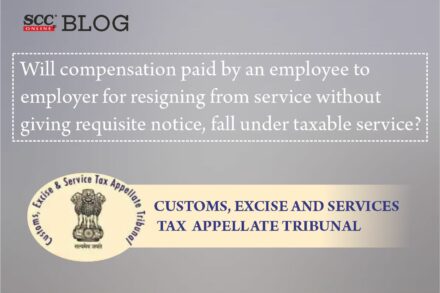 Will compensation paid by an employee to an employer for resigning from service without giving requisite notice, fall under taxable service? CESTAT decodes

Significance of ‘suo motu’ action under S. 35 of Advocates Act | Synoptic report of  Madras HC decision on power and mechanism of Bar Council to take action against erring Advocates