Supreme Court: Considering the pressing need of filling up the huge vacancy in police force, the bench of J.S.Khehar, CJ and Dr. D. Y. Chandrachud, JJ approved the selection process suggested by the States of Uttar Pradesh, Karnataka and Tamil Nadu and asked the States to duly comply with the timelines suggested by them for achieving the aforementioned goal.

The State of Uttar Pradesh said that 3200 Sub-Inspector of Police and 30000 Constables, will be recruited each year over four years commencing from the year 2018

The State of Tamil Nadu said that it would fill up the 77 vacancies in the cadre of sub-inspector within 5 months and the 17,589 vacancies for the post of Constable will be filled up by April, 2018.

Regarding the States of West Bengal, Bihar and Jharkhand, who had been issued notice earlier to come up with an action plan, the Court deferred the proceedings to 01.05.2017. The Court also asked the Home Secretaries of the States of Gujarat, Telangana and Rajasthan to to prepare a definite road map for filling up the vacancies of police personnel. [Manish Kumar v. Union of India, WRIT PETITION(C) NO.183/2013, order dated 24.04.2017]

J&K HC | Order of detention under J&K Public Safety Act cannot ordinarily be passed, merely on ground that an accused under trial was out on bail 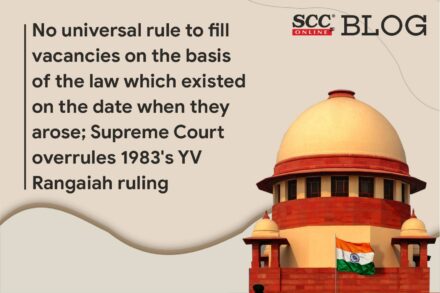 No universal rule to fill vacancies on the basis of the law which existed on the date when they arose; Supreme Court overrules 1983’s YV Rangaiah ruling

Failure to pay interest, not deficiency in services where interest to Institutions was prohibited under the scheme