Supreme Court: Writing down a 331 pages long judgment, the 5-judge constitutional bench of Jagdish Singh Khehar, Dipak Misra, Madan B. Lokur, Pinaki Chandra Ghose and N.V.Ramana, JJ. Quashed the the order of the Governor dated 9.12.2015 preponing the 6th session of the Arunachal Pradesh Legislative Assembly by a month without consulting the Chief Minister, Council of Ministers or the Speaker, on account of being violative of Article 163 read with Article 174 of the Constitution of India. It was said that it is not within the realm of the Governor to embroil himself in any political thicket. The provisions of the Constitution do not enjoin upon the Governor, the authority to resolve disputes within a political party, or between rival political parties. The action of the Governor, in bringing the aforesaid factual position to the notice of the President, in his monthly communications, may well have been justified for drawing the President’s attention to the political scenario of the State. But, it is clearly beyond the scope of the Governor’s authority, to engage through his constitutional position, and exercise his constitutional authority, to resolve the same.

Stating that it is open to the Governor to take into consideration, views of a breakaway group, the Court held that in the present case, the breakaway group belonging to the ruling INC comprised of 21 members, whereas the INC had 47 MLAs in the prevailing 60-member Legislative Assembly. 21 MLAs belonging to the INC did not constitute a legitimate and recognizable breakaway group. The Governor could not in support of the protests and assertions of an invalid breakaway group, adopt a constitutional course, recourse whereof could be taken only in case of a constitutional crisis. It was further noticed that it has never been the position of the Governor, that the Chief Minister – Nabam Tuki, had lost the confidence of the House. Nor, that the INC could not sustain its majority in the Assembly. Had that been the position, the Governor would have called for a floor test.

The Speaker had disqualified the rebel MLAs including the deputy Speaker on 15.12.2015 by an ex-parte order as no response to the notice issued on 07.12.2015 was submitted by any of them. As a result, in a purely unprecedented and unconstitutional manner, the Deputy Speaker – Tenzing Norbu Tongdok quashed the order of disqualification, even though he himself had been unseated through the disqualification order and had also conducted the proceedings of the 6th Session of the Assembly on 16.12.2015 even when the Speaker– Nabam Rebia had announced that the 6th session of the Assembly would not commence on 16.12.2015. The notice of resolution for the removal of the Speaker, was taken up for consideration as the first item, in the agenda of the Assembly on 16.12.2015. The resolution was adopted resulting in the removal of Nabam Rebia, from the office of Speaker. [Nabam Rebia, and Bamang Felix v. Deputy Speaker, 2016 SCC OnLine SC 694, decided on 13.07.2016]

The Court hence, held that all steps and decisions taken by the Arunachal Pradesh Legislative Assembly, pursuant to the Governor’s order and message dated 9.12.2015, are unsustainable and liable to be set aside. 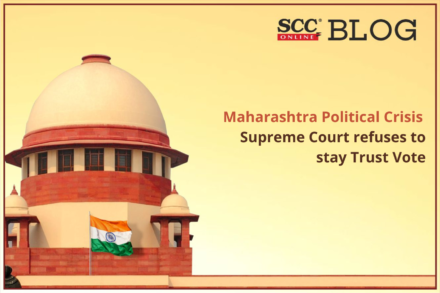 Ker HC | Invocation of writ petition under Art. 226 not warranted in determining the custody of child