Delhi High Court: A Single Bench of Rajiv Sahai Endlaw, J., while relying upon Punjabi University v. Union of India, 2011 SCC OnLine Del 3496, and Vijay Shankar Pandey v. Union of India, 2003 SCC OnLine Del 953  dismissed the petition for annulment of Dronacharya Award given to wrestling coach Mr Anup Singh and noted that the selection for excellence in sports cannot be scientific and mathematical and necessarily entails a discretion.

The petitioner has contended that he was the more deserving candidate for the Award since under the prescribed point-based criteria for selection he was nominated with 420 points as against 377 points of Mr Anup Singh. However, it was noted that besides laying down the point-wise criteria, sufficient leeway has also been given to the Selection Committee’s discretion for the choice of the recipient for the Award. As per Clause 1 of prescribed criteria, 80% weightage was to be given for the medals won in various Championships by the sportsperson trained by the Coach, whereas 20% weightage has to be given to Selection Committee’s assessment. Moreover, the petitioner didn’t challenge the prescribed criteria, rather he pointed out errors in application of the criteria. The Court noted that the judicial review is of the decision-making process and not of the decision and thus dismissed the petition for lack of merit.

However, the Court also added that such awards would lose their sheen and cease to be coveted and perceived as indicative of the excellence of the holder thereof if they are conferred on persons not deserving thereof or if selection thereof is guided not by the spirit of award and identifying excellence but for extraneous reasons. Utmost care and transparency should be observed in the selection of the recipient of such awards and the awards ought not to be conferred on those who are not perceived by those having expertise in the subject as deserving thereof. [Vinod Kumar v. Union of India, 2016 SCC OnLine Del 3122, decided on 18.05.2016] 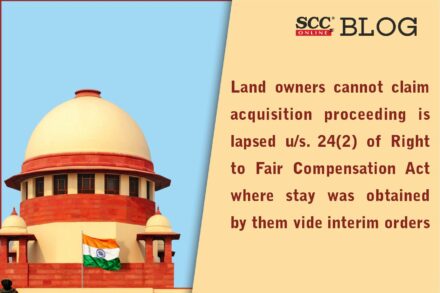