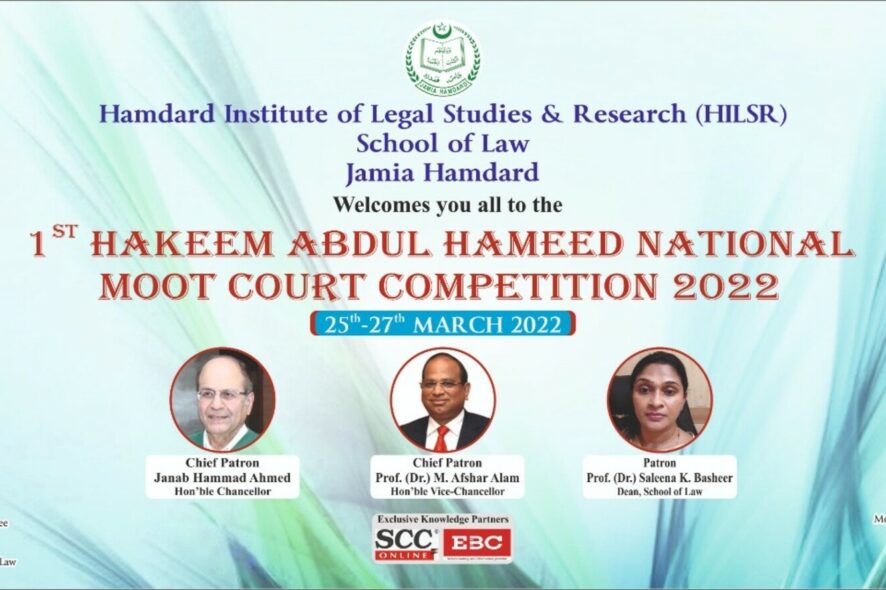 Hamdard Institute of Legal Studies and Research, HILSR, School of Law, Jamia Hamdard is pleased to welcome you to the live blogging of 1st Hakeem Abdul Hameed National Moot Court Competition, 2022. The competition will commence from 25th March 2022 – 27th March 2022. The competition is organised in collaboration with our Knowledge Partners, SCC Online and Eastern Book Company.

A total number of 15 teams are participating in the oral rounds after the qualification through the memorial rounds. The event will include 4 rounds, ie, Preliminary Round 1 and 2, Quarter Finals, Semi Finals and Finals.

The Moot Court Committee at Jamia Hamdard invite you to be a part of this 3 day journey of where the talented mooters are sweltered under intense pressure. May the force be with you!

4:30pm – The guests have arrived, the stage is set for the commencement of the Inaugural Ceremony

4:31pm – The co-hosts and members of MCC, Janhvi Joshi and Amaal Sheikh start off the ceremony by welcoming the various dignitaries, Chief guest, alumni, participants and audience.

4:50pm – The Dean of School of Law, Prof (Dr) Saleena K Basheer has taken the stage to deliver the Welcome Address. She emphasised on the importance of mooting for law students and welcomed all the participants in the Competition.

5:00pm : The Vice Chancellor of Jamia Hamdard, Prof Dr Afshar Alam is invited on stage to address the audience.

5:10pm : The Chief Guest for the ceremony, Hon’ble Justice K.G Balakrishnan, Former Chief Justice of India takes the stage for his address. He begins by acknowledging the legal exposure of India and foreign countries. He kindly mentioned an endless high-take work exposure in the upcoming future. He appreciated the Moot Court Committee (MCC) and further suggested to step-in Trial Advocacy, which will reveal the witnessing skills and scope of investigation in practical aspect.

5:30pm : The ceremony approaches its end with the vote of thanks relayed by Adiba Maaz, member of MCC. She expresses her gratitude to all the guests in the event, the organisers and knowledge partners along with thanking the audience.

5:33 pm : The inaugural ceremony has come to an end

6:00pm : The teams are briefed about the competition and allotted court rooms for Preliminary Rounds 1 and 2.

10:00am : 7 Courtrooms have been set up, ready for anticipating participants to enter their respective courtrooms

10:15am: The judges for the Preliminary Rounds have been briefed officially. A comprehensive bench memorial and a condensed version of the memorial prepared by the Moot Court Committee were presented to each judge.

10:30am: With an unfettering zeal, the Preliminary Round has taken off in full swing in all the courtrooms and the teams are presenting their arguments with the prior permission of the court master subject to the authority of 2 judge bench.

10:31am: Counsels in each courtroom have started with their arguments.

The petitioners began with briefing the constitutional bench on the facts of the case before proceeding to the arguments. The issue at hand is regarding the maintainability of the case along with whether or not private entities capable of discharging public functions are amenable to writ jurisdiction of the Supreme Court; whether Petitioner’s statement which virtually mobilised large number of people amounts to sedition,  and whether she is entitled to protection from arrest; Whether the IT Rules should be declared unconstitutional and Whether the right to be forgotten be declared as fundamental right under the Constitution of the country?

In one of the court rooms, the counsel for petitioner takes a minute to set her own timer ahead of the court master’s; another courtroom witnesses intense grilling by the judges without hearing the facts in full. The energy in all the courtrooms is as high and intense as it was when it began. The participants haven’t lost their calm, nor have the judges lost interest. One of the teams have repeatedly apologised for errors in their memorial. Another team, on being commented upon by the judge stating that when you ask a large number of people to boycott laws, you are leading them into committing an act of criminal offence. The counsel’s strong willed statement, “Boycotting does not mean creating violence” doesn’t have the judge convinced. Instead, she is flustered when she couldn’t describe ‘criminal offence’ or why the party has approached the court. Diamonds sure are made under pressure, but so is self doubt.

The counsels in courtroom 2 seem to be thrown off balance when the two judge bench asked her to describe anti-national. A question on the structure of the compendium was raised which prompted the researcher to answer the question, an act that was quickly barred by the judges. The participants have worked tirelessly on, in high spirits. The judges are actively attempting to dissect the counsels’ arguments and the questions pour in. The Petitioners have stated that the right to forgotten is Fundamental Rights’. They referred to the KS Puttawamy Judgment along with the Art. 21 of the Indian constitution. The line of arguments doesn’t restricted to landmark judgement only. Following this, the judge has raised a really pertinent question – Difference between discharge and acquittal case? The counsel tried to cover the arguments in various folds. Following the intense mooting session, the teams also present their respective rebuttals and sur-rebuttals.

Both these rounds together will determine which teams qualify for the Quarter-final. We look forward to seeing the teams showcasing their talent! We wish all the teams the best of luck.

3:45pm – Draw of lots and exchange of memorials for Quarter Final rounds have taken place.

5:00 pm – The Quarter finals have begun. Judges have taken their seat in respective courtrooms.

Out of 14, 8 teams qualified to the quarter finals round. The round had the participants ripped to the edge of their seats. Questions posed towards the counsels were crafty. In courtroom 4, the exchange between judge and petitioner 1 had the judge cut her in between saying that her case laws do not support her argument. As daunting as it sounds when in midst of presenting your argument, the counsel seems to hold her composure and gracefully address the second issue. Petitioner 2, after seeking permission to approach the bench, raises issues on the Section 3 and 4 of the IT Rules wherein despite ban on posting certain posts is not explicitly stated, the clients principles of natural justice seem to have been violated. Under upholding the right to privacy as a fundamental right, the counsel argues that he has the right to not have his identity revealed when he chooses to post on social media platforms. The judge probes that unless a person is sharing distasteful content, there shouldn’t be anything wrong with his/her name being disclosed.

10:15am – The judges have arrived. Semi-final rounds have begun.

The counsels in both the courtrooms have begun with their arguments. The Hon’ble 3 judge bench in courtroom 1 seeks clarification as to why the petitioner is approaching the Hon’ble Supreme Court instead of High Court. In this regard, further clarification arises as to when we exercise Section 482 of CrPC. The counsel is trying to cover their arguments in various folds but it seems that the judges aren’t convinced. The judge has asked “Is there any specific case of anticipatory bail that you referred to?” The judge has asked counsel to convince them in the next two minutes. There’s an uncomfortable pause. Looks like the counsel required a glass of water to gather her confidence. The respondent contended in their argument Art.142 of the Indian constitution to which the judges questioned, “Is the counsel is well aware of Art 142”

“Your lordship, I am not aware”

“Why did you say Indeed?”

In line with the argument, the counsel tried to differentiate between influential people and common people. The bench didn’t allow it based on the merits of the law and proceeds to point out that “ if you are a lawyer, you can’t differentiate between us and the people.” The counsel refers to Anwar Ali judgment in closing arguments based on reasonable restrictions.

1:45 pm – Draw of lots and exchange of memorials for the final round has begun.

3:00 pm – Senior Advocate Aman Lekhi and Senior Advocate Maninder Singh have arrived to judge the final round. The courtroom is filled with students and attendees. Everyone is waiting in anticipation.

The first issue raised is regarding maintainability under article 32. Article 12 was interpreted deeply. Petitioner contended that the organization is financially, administratively dependent upon the Government and for that reason, the institution comes within the ambit of other authorities under article 12. The next issue raised is regarding sedition. Section 124A of the IPC was intricated & interpreted deeply by both the petitioners and the respondents. Where the petitioner quoted the landmark case of Kedar Nath v. State of Bihar and relied on various other judgments of the Supreme Court

The respondents however are denying any financial aid to the institution and claimed that they are a fully private institution. They are now arguing on the point of tendency and intention. Respondent’s further contention was that mere remote intention to create violence will not fall within sedition. There must be the tendency to create such violence immediately by means of hate speech or incitement of violence under section 124A.

5:00pm – The final round has come to an end. There seems to be a sense of relief over the participants and

6:30pm – The Valedictory Ceremony commences. Amaal Sheikh and Janhvi Joshi, members of the Moot Court Committee begin by welcoming the esteemed dignitaries and giving report of the 3-day event.

6:33pm: Salman Ali, student of HILSR, is called upon the stage for recitation and translation of Surah Duha from Holy Quran.

6:40pm: Chief Guest, Hon’ble Justice Kurien Joseph addresses the gathering. He addresses the participants and students to be upholders of justice, to stand against communalism, casteism, and corruption. He talks elaborately about the recognition of rights and duties and ends on the note that the silence of lawmen is more dangerous than the violence by non-lawmen.

7:23pm: Prof (Dr) M Afshar Alam hands over a token of appreciation to the organizing committee.

7:30pm: Adiba Maaz, member of the Moot Court Committee renders the vote of thanks. 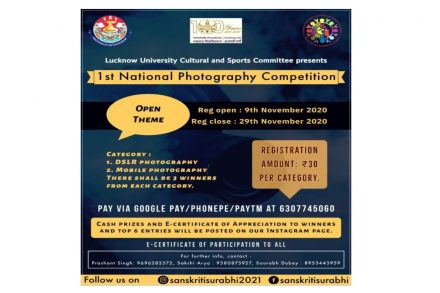 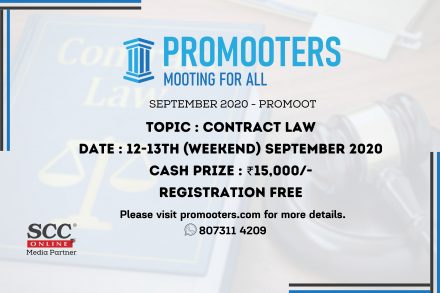 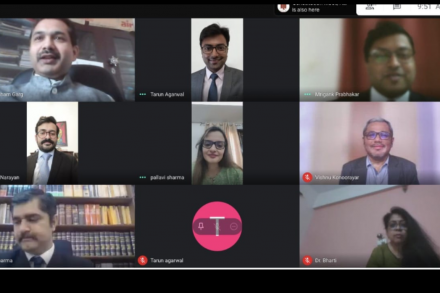