Jammu and Kashmir High Court: Sanjeev Kumar, J. dismissed a writ petition which claimed promotion and challenged the government order which was made on the basis of serious allegations regarding the disproportionate acquisition of property.

Respondent 2 herein, on a complaint, conducted a secret verification and found that the petitioner had acquired huge assets both movable and immovable, which were disproportionate to his known sources of income. He registered an FIR against the petitioner for the commission of offence under Section 5(1)(e) read with Section 5(2) of the Jammu and Kashmir Prevention of Corruption Act, 2006. He also wrote a communication to respondent 1 (Administrative Secretary) for initiating departmental action under Jammu and Kashmir Civil Services Rules, 1956 against the petitioner. Respondent 1 by passing an order attaching petitioner with the Chief Engineer, PHE Kashmir. Petitioner was Superintending Engineer in a hydraulic circle, Kargil. He claimed that due to his seniority he was likely to be promoted to the post of Chief Engineer. Aggrieved by the said order, the petitioner challenged both the aforesaid communication as well as government order by way of this petition.

Petitioner claimed that the impugned communication issued by respondent 2 and the impugned government order by Administrative Secretary was illegal, arbitrary, mala fide and without any authority of law; and the same could not be sustained in law as they were not traceable to any provisions of Jammu and Kashmir Civil Services Rules, 1956. He also contended that no employee can be penalized only on the ground that an FIR for his misconduct was registered with the police or Anti-Corruption Bureau and pleaded that the impugned communication and order were only aimed to denude him from his right to seek promotion to the post of Chief Engineer. Respondent 1 denied the allegations of arbitrariness and mala fide and objected the writ petition on the ground that the impugned government order was fully justified as the allegation against the petitioner was serious and disproportionate to his known sources of income. He also claimed that the petitioner had been attached with the Chief Engineer not only because an FIR regarding his misconduct was pending investigation before respondent 2 but also because a full-fledged departmental enquiry against him was contemplated.

Court held that the department was competent to hold a departmental enquiry solely on the basis of the allegations made against an employee and this power of the employer was independent of the power of the police and the Anti Corruption Bureau to register FIR and investigate the allegations. The delinquent employee may be acquitted by the Court of law on finding that the prosecution could not prove his guilt, but he can be penalized in the disciplinary proceedings, which were decided on the basis of preponderance of probabilities. The Court also observed that as per Section 31 of Jammu and Kashmir Civil Services Rules, 1956 he could also be suspended, if the complaint against him of any criminal offence was under investigation or trial. Hence, respondent 1 had shown leniency and instead of suspending him had only attached him with the Chief Engineer. Therefore, it could not be said that the order by respondent 1 was without jurisdiction or without any sanction of law. Thus, the petition was dismissed for being devoid of merit.[Sarwan Singh v. State of J&K, 2019 SCC OnLine J&K 518, decided on 07-06-2019] 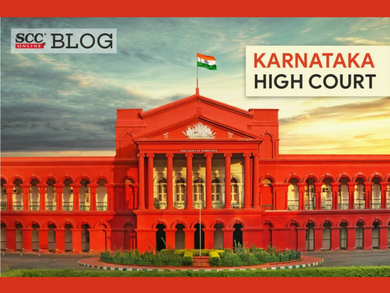 Karnataka HC | Healthcare Global Enterprises’ loss of profit due to price regularisation of essential anti-cancer drugs, is not a ground for judicial review of a Government Policy

COVID 19 | All HC takes cognizance of adverse affect of COVID 19 on advocates, issues notice to Bar Councils in the State asking for steps taken by them for welfare of advocates