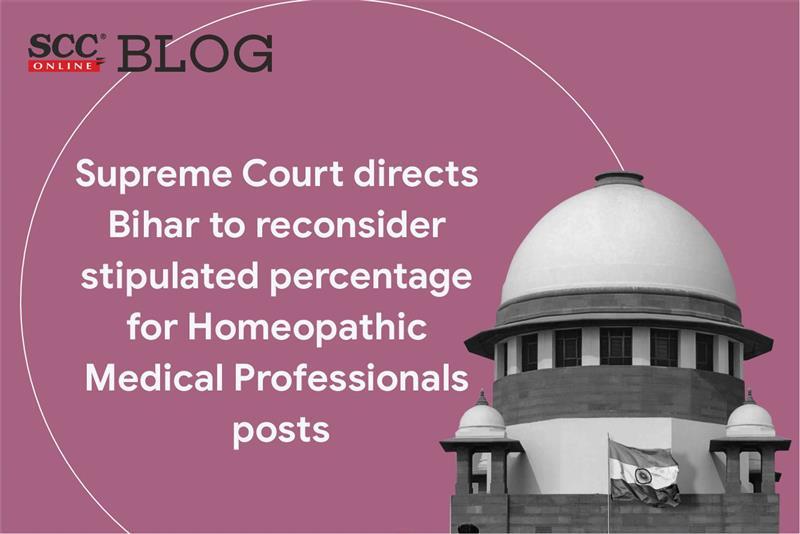 Supreme Court: In an appeal filed to espouse the cause of Homeopathic Medical Professionals, the Division Bench of Uday Umesh Lalit and S. Ravindra Bhat, JJ., directed the Bihar government to reconsider the stipulated percentage for filling up the posts of Medical Professionals.

The appellant-petitioner had approached the Court to assail the dismissal of his petition by the impugned order and judgment of the Patna High Court.

Noticeably, the appellant had filed a petition in the High Court challenging the validity of the Bihar District AYUSH Medical/State AYUSH Medical Service (Appointment on Regular/Contractual Basis and Service Condition) Rules, 2010 and the Resolution No.25 dated 13-01-1998 issued by the Department of Health, Government of Bihar stipulating following percentage for filling up the posts of Medical Professionals in the respective disciplines:

The basic submission of the petitioner was that the prescription percentage was not commensurate with the number of Homeopathic Medical Professionals and the students or the demand for Homeopathic medicine. However, the said petition was rejected by the High Court.

Pertinently, the State could not readily answer the Court's query as to the justification or the reason which weighed with the Government in making the aforesaid prescription.

The Court noted that in the year 2020, two legislations namely, the National Commission of Homeopathy Act, 2020 and the National Commission for Indian System of Medicine Act, 2020 were enacted by the Parliament. Since the resolution in question was of the year 1998, without going into any submission advanced on behalf of the parties, the Court opined that it would be in the fitness of things that the matter is considered afresh by the authorities concerned.

The Court added that while reconsidering the matter the authorities concerned shall take into account all the relevant factors; i.e., the number of practicing Professionals in concerned disciplines, the number of students and colleges admitting students in respective discipline(s), and such other relevant factors. The State had assured the Court that the appropriate steps will be taken within three months.

In the light of the above, the appeal was disposed of.

Manish Kumar, Advocate, for the State. 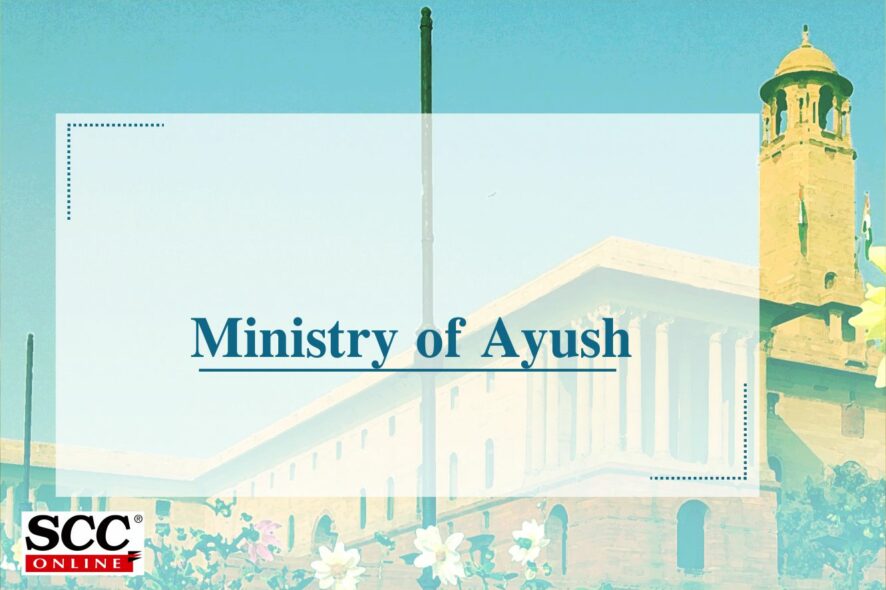 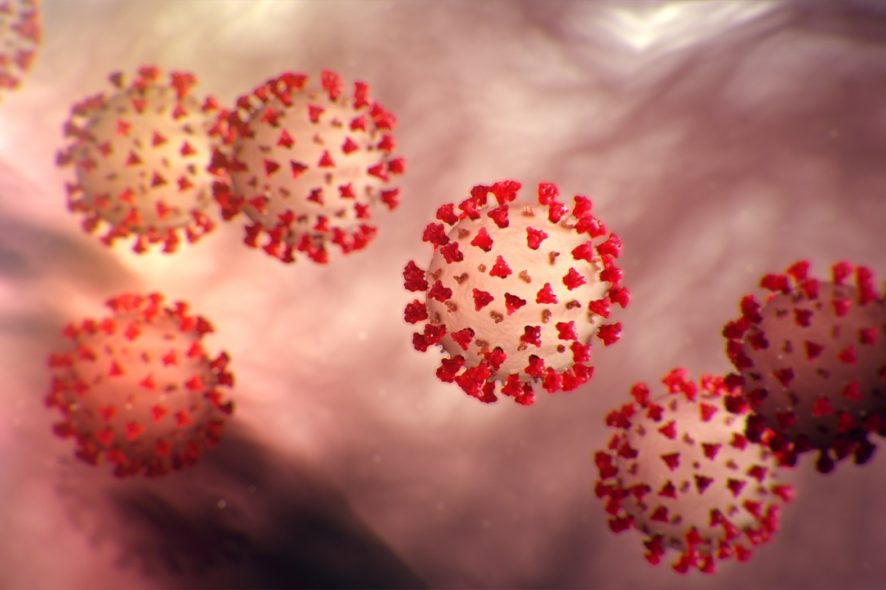 F. No. L.11011/8/2020/AS.—In the wake of COVID-19 caused by SARS CoV 2, there has been surge in proposals received by Ministry of AYUSH for claiming possible treatment of COVID19. At present, there is no approved treatment for COVID 19 infection. Indian Traditional Medicines have wide potential for usage in such conditions owing to their longstanding use in the community, huge number of ancient references and large number of publications in scientific journals on their phyto-chemical constituents, mode of action, clinical efficacy etc. At the same time, it is also essential to have scientific evidence on use of any Ayurveda, Unani, Siddha or Homeopathy formulation on prevention/ management of COVID 19. Therefore, it is felt necessary to make serious efforts for development of drugs based on any of AYUSH systems recognized under Drugs and Cosmetics Act, 1940.

2. There are no specific regulatory provisions in the Drugs & Cosmetics Rules 1945, for conduct of clinical trials of Ayurveda, Siddha, Unani and Homeopathy drugs. At the same time it is also necessary that the clinical data generated is scientifically valid and credible. In this context the Ministry has undertaken consultation with DCGI, CDSCO as well as other research experts.

3. In the above background and based on the consultation of CDSCO, the Ministry of AYUSH with the approval of Minister of State Independent Charge for AYUSH notifies that scientists, researchers, clinicians of any of recognized systems of medicine under IMCC Act, 1970, HCC Act 1973 and NMC Act 2019 (formerly IMC Act 1956) can undertake research on COVID19 through Ayurveda, Siddha, Unani and Homeopathy systems including prophylactic measures, intervention during the quarantine, asymptomatic and symptomatic cases of COVID -19, public health research, survey, lab based research etc. to generate evidence

4. While undertaking research, it is mandatory for the organizations to comply with the following conditions:

(i)  The proposals should be approved by their scientific advisory bodies and Institutional Ethics Committees.

(ii)  If it is clinical trial, the project should be registered with CTRI.

(iii)  The sample size should be based on statistical justification.

(iv)  The Clinical research should be conducted as per AYUSH guidelines for Clinical Research or ICMR guidelines.

(v)  Compliance with relevant regulations for Bio-medical and Health Research.

(viii)  Compliance with any other relevant regulations in force.

(ix)  AYUSH registered practitioner/expert should be part of the study team at each site.

5. It would be mandatory to the institution/organization to appraise the Ministry of AYUSH, Govt. of India about the research developments as per research timeline and the outcome.

The MoU with the Central TB Division of the Ministry of Health & Family Welfare outlines the scope and extent of AYUSH involvement in sensitization, awareness generation, capacity building of AYUSH institutions and health service providers in the areas of TB diagnosis, control and management. Focused activities envisaged under the MoU will cover joint planning to work with AYUSH organisations & professional bodies and promote adjuvant use of evidence-based AYUSH interventions for, TB control and management. It is also intended to facilitate research collaboration and best practices of AYUSH healthcare and build up capacities for TB-free workplaces and communities. Both Ministries will appoint Nodal Officers for development of implementation plan, modalities of operationalization and steering the collaboration activities outlined in the MoU. 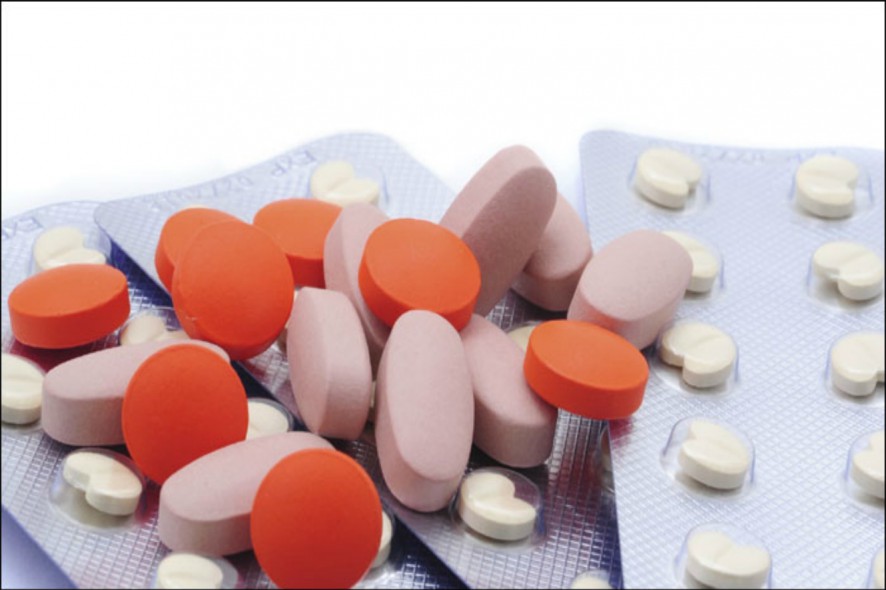 The salient features of the MoU are as follows —

As per Section 24(1) of Traditional & Complimentary Medicine (T&CM) Act 2016 of Government of Malaysia, a person who is registered as a practitioner outside Malaysia can temporarily register with T&CM Council of the Malaysia subject to conditions and restrictions of the Council.