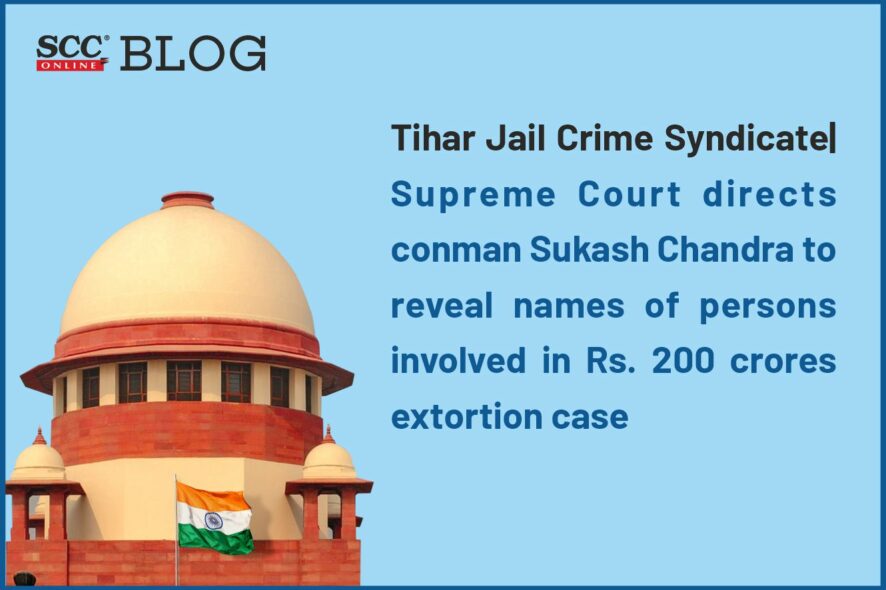 The petitioner, Sukash Chandra Shekhar-infamously known as Conman Sukash for extorting about Rs 200 crores while sitting in a cell of Delhi’s Tihar jail-had filed the instant petition under Article 32 of the Constitution alleging that he was subjected to threats and was a victim of extortion racket run by some of the officers of the prison where he is presently lodged. Asserting that his health and safety are in danger, he has prayed for various reliefs including his transfer from Tihar jail.

Earlier, by the order dated 17-06-2022, the Court had directed the authorities concerned to suggest the appropriate jail for transferring conman Sukash to which the respondents had suggested that Mandoli jail in Delhi, which is guarded by paramilitary forces, would be appropriate. However, the respondents had pressed that shifting of the petitioner from Tihar Jail is unwarranted. Similarly, the Enforcement Directorate had also approached the Court seeking vacation/recall of order dated 17-06-2022.

On the contrary, the Commissioner of Police, NCT of Delhi (Respondent 2) asserted that while being inside Tihar Jail, the petitioner was running a crime syndicate and was paying approximately Rs. 1.5 crores every month for getting certain facilities, including mobile phone, without any hindrance, to pass messages to the members of his syndicate. It was further alleged that some of the jail officials were on a monthly payroll of the petitioner.

Relying on the assertions made by Respondent 2, counsel for the petitioner, Senior Advocate R. Basant submitted that Respondent 2 itself had accepted that the jail officials were receiving certain money from and on behalf of the petitioner. It was further submitted that during the period between July, 2020 to August 2021, the amounts paid by the petitioner or on his behalf aggregated to about Rs. 12.5 crores, major part of which was in cash.

However, on being asked by the Court as to who were the persons who made payments on behalf the petitioner, the petitioner expressed his inability to respond to the query immediately, only to add later that the persons could be identified from the affidavit submitted in reply. The Court noted,

“If we go by the assertions made in the affidavit in response, while being in jail, the petitioner was able to garner support from outsiders who paid Rs. 12.5 crores on his behalf to the public servants or other interested persons.”

Opining that in order to come to the conclusion, whether the petitioner was subjected to extortion (as asserted in the petition) or he was running a crime syndicate and was bribing his way through (as asserted by the respondents), it would be necessary to understand the identity of the persons and the manner in which they made the payments on behalf of the petitioner, the Court directed the petitioner to submit a list of persons, giving all the details as to the payments made by any and every one of them and to whom the payments were made.

Delhi High Court: Mukta Gupta, J., explained under what circumstances would Section 397 of penal Code, 1860 would be attracted.

By the instant appeal, the appellant challenged the decision convicting the appellant for offence punishable under Section 397 of Penal Code, 1860.

An FIR was registered for the offence punishable under Sections 392/397/34 IPC on the statement of the complainant who stated that the appellant and co-accused committed robbery of his mobile phone made Karbon from his possession by showing him a deadly weapon, that is the blade.

High Court stated that it is trite law that even if the weapon of offence is shown after snatching had taken place for running away along with snatched article, an offence under Section 397 IPC is attracted.

Section 390 CrPC provides that in a robbery, there is either theft or extortion. It is further provided that theft is ‘robbery’ if, in order to committing of the theft or in committing the theft, or in carrying away or attempting to carry away property obtained by theft, the offender, for that end, voluntarily causes or attempts to cause to any person death or hurt or wrongful restraint, or fear of instant death or of instant hurt or of instant wrongful restraint.

Hence, if the offender uses the deadly weapon at the time of committing robbery or dacoity which would include even the fear of instant death or instant hurt or wrongful restrain or an attempt to cause death or hurt or wrongful restraint even while carrying away or attempting to carry away the property obtained by theft, the act of the offender will fall within the four corners of Section 397 IPC.

In view of the above position of law, High Court rejected the submission that the Section 397 IPC will not be attracted since the blade was allegedly shown after the mobile phone was robbed.

Further, the contention that since the blade had not to be recovered, it cannot be held that the same was deadly weapon, Court expressed that it is well settled that whether the weapon of offence was deadly or not, is a question of fact which would depend on the nature of the weapon used in the offence.

A pistol, revolver, sword, axe or even a knife are deadly weapons. However, in the case of knife, the length of the knife, its sharpness and the pointed edge has to be seen to ascertain whether the knife is a deadly weapon or not.

In the present matter, the prosecution’s evidence was that the appellant took out a blade and kicked the complainant.

Court held that since from the evidence of the prosecution witnesses the size and sharpness of the blade was not proved, the prosecution failed to prove that the appellant used a deadly weapon.

Chinmayanand who is an Ex-BJP Minister was accused of raping a law student has been granted bail.

The woman who has been said to be raped by the minister was arrested in connection with an extortion case filed on the basis of Chinmayanand’s complaint, wherein he stated that the woman along with few other friends of hers had demanded Rs 5 crore from him while threatening him with the release of some inappropriate videos.

Victim had alleged that she was repeatedly raped and blackmailed by Chinmayanand for over a year.

Bombay High Court: In an interesting case, M.G. Giratkar, J., maintained conviction of a journalist for the offence of extorting money from the complainant — an old man, around 72 years of age.

Sonba Bhaisare (complainant) sold certain land after getting it converted from agricultural to non-agricultural. It was alleged that the accused, a journalist by profession, met Sonba Bhaisare time and again and threatened him to publish reports against as the subject land was a bhoodan land and therefore the conversion was illegal. He also threatened to file a PIL and further threatened to make complaint to the Collector and get the houses built on the subject land demolished it. It was further alleged that the accused demanded Rs 50,000 to refrain from his activities which was agreed to by Sonba after initial reluctance. However, Sonba made a complaint to the Police who laid a trap and caught the accused taking an installment of Rs 10,000 from Sonba in a temple as agreed between them. Consequently, the accused was convicted under Sections 384 and 385 IPC by the trial court which was upheld by the first appellate court. Aggrieved thereby, the accused filed the present revision petition.

Noting all the facts of the case, the High Court was of the view that the trial court’s judgment needs to be upheld. Reflecting on the conduct of the accused, the Court stated, “intention of the accused is very clear to extract the money from the complainant and others. He was threatening them. Not only threatening but also filed PIL. Therefore, activities of the accused clearly show that he is a person who might have earned money by such tactics from various persons.” Observing that “all the illustrations to Section 384 show that even a threatening by journalists who are reporters to publish news in a newspaper to defame a person amounts to extortion”, the Court went to hold that the prosecution was able to prove the case against the accused beyond reasonable doubt and hence his conviction was maintained.

Lastly, regarding leniency in sentencing, the Court observed, “This type of crimes are increasing day by day, by threatening the officers or innocent persons. They are extracting money in the name of journalists. The accused has misused his position and threatened the complainant and purchasers, therefore, he is not entitled to any kind of leniency”. [Sharad Balkrushna Deotale v. State of Maharashtra, 2019 SCC OnLine Bom 305, dated 21-02-2019]

Supreme Court: In the controversy arising due to the voice samples taken in the matter where the appellants had allegedly demanded a sum of money to refrain from telecasting programmes on a television channel pertaining to the alleged involvement of a corporate entity in a wrongful activity pertaining to the allocation of coal blocks, it was argued by the Appellants that they were being made to read out inculpatory material drawn from an audio recording of the alleged sting operation.

The 3-judge bench of T.S. Thakur, CJI, A.M. Khanwilkar and Dr. D.Y. Chandrachud, JJ held that there was no substance in the submission that the text which is to be read by the Appellants in the course of drawing their voice samples should contain no part of the inculpatory words which are a part of the disputed conversation as a commonality of words is necessary to facilitate a spectrographic examination. Stating that it is not open for the Appellant to dictate the course of investigation, the Court said that the Appellants had not been forced or coerced into furnishing such a sample since it was they who had furnished their consent; secondly, a voice sample is not evidence since its purpose is only to compare it with the questioned text.

Earlier, Delhi High Court had ordered that the purpose of a voice sample is to facilitate the process of comparing it with a recorded conversation. The voice sample is not a testimony in itself since it only constitutes what was described as ‘identification data’ and hence, it is not a substantive piece of evidence. By the order dated 01.07.2016, the Court had directed the Appellants shall be required to read out for the purpose of giving their voice samples using words, but not the sentences, appearing in the disputed conversation in such number as the Director/Scientific Officer may consider necessary for the purpose of comparison in order to ensure that the text which the Appellants would be called upon to read out for the purpose of drawing their voice samples will not have sentences from the inculpatory text. Similarly, permitting the text to contain words drawn from the disputed conversation would meet the legitimate concern of the investigating authorities for making a fair comparison. [Sudhir Chaudhary v.  v. State of NCT of Delhi, 2016 SCC OnLine SC 747, decided on 29.07.2016]