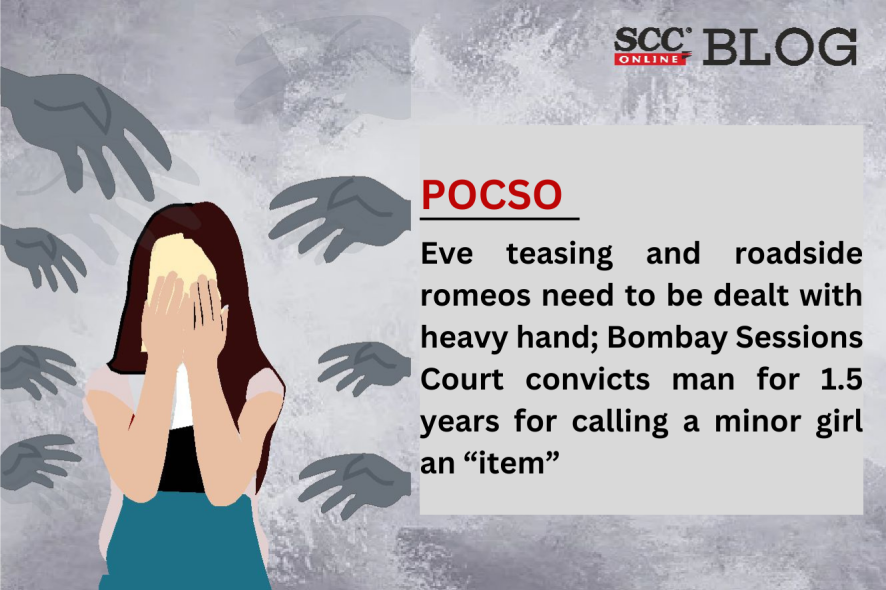 The victim is a 16-year-old girl and the accused is a boy from the neighborhood who is alleged of passing comments upon the victim ‘X’ and said “kya item kidhar ja rahi ho?” while she was returning home from school.

The Court noted that in order to bring home the offence under Section 354 of IPC, the prosecution is required to prove the fact of the accused having either assaulted or used criminal force to a woman with the intention to outrage her modesty or with the knowledge that the said act would likely outrage the said victim’s modesty.

The Court further noted that there is nothing on the record to prove that any persons in the vicinity had witnessed the incident which had occurred between the the victim ‘X’ and the accused on the day and time in question. In such circumstances, there was no plausible reason to disbelieve the clear and cogent evidence of PW 1 the victim ‘X’ regarding the incident and the behavior of the accused, merely on account of the investigating officer not having recorded the statements of any other person.

Thus, the fact of the accused having intentionally touching the victim ‘X’s hair and pulling it, along with calling her an “item”, certainly proves the fact that he has outraged her modesty as “item” is a term used generally by boys to address girls in a derogatory fashion as it objectifies them in a sexual manner and the same clearly indicates his intention of outraging her modesty.

The Court also opined that in order to bring an offence within the provisions of POCSO Act, the prosecution is required to first prove the fact of the victim being a “child” within the meaning of the term as given to it under section 2(d) of the POCSO Act.

The Court perused the birth certificate of the minor victim issued by the Municipal Corporation of Greater Mumbai, which is a public document, and records PW 1 the victim ‘X’s date of birth being 24-12-1999 and was 15 and ½ years on the day of the incident. Therefore, she was a “child” within the meaning of the term as given to it u/s. 2(d) of the POCSO Act.

The Court observed that the prosecution has proved the fact that the accused with sexual intent, used to repeatedly or constantly follow the child and sexually harassing her. The other charges alleged stands not proved due to lack of cogent and reliable evidence. 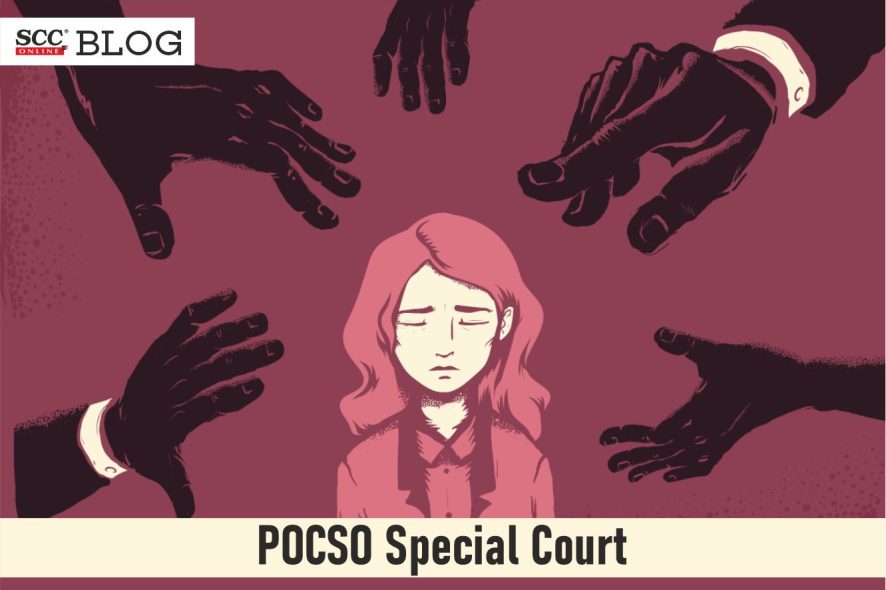 POCSO Special Court, at Fort, Gr. Bombay: In a case where charge sheet is filed against the accused for offences punishable under sections 354(A), (B), 504, 506 of Penal Code, 1860 (IPC) and under section 12 of Protection of Children from Sexual Offences Act, 2012 (POCSO), Priya P. Bankar, J., convicted the accused and sentence him for imprisonment under Section 7 punishable under Section 08 of POCSO Act, Section 354 and Section 506 IPC. The Court further directed the accused to pay compensation to the victim child , failing which, the said amount will be paid out of Victim Compensation Scheme.

The victim is 15 years old residing along with her family members. Accused used to stand in front of her house. Once, when, victim went nearby to purchase the household articles, the accused allegedly pulled her dupatta and held her hand. On the victim threatening that she will complain to her father, the accused said ‘Tere pappa ko ghar me ghuske marunga‘. On returning home, the victim informed the said incident to her father to which he made a phone call to accused and the accused abused the father of the victim. So, the complaint was lodged against the accused at Mahim Police Station. The charge sheet was filed, and the trial commenced.

Counsel for State submitted that despite of understanding given to the accused by the father of the victim, he has continued his acts of assaulting the minor sexually, thus he deserves maximum punishment.

Counsel for accused submitted that he is the only earning member of his family and he is 23 years old, thus requests Court to show leniency while awarding the sentence and minimum sentence be awarded as he has no criminal antecedents.

The Court noted that the accused has taken defense about the love affair between him and the victim, but the said defense is not acceptable, looking at the age of the victim.

The Court further noted that in view of the evidence by PW 1 shows, the accused has threatened to beat her father after entering the house. So, said threat was causing injury to the father of victim, with intend to cause alarm and to do act, which she is not legally entitled to do by means of execution of such threats, is a criminal intimidation. Thus, the prosecution has proved the offence punishable under Section 506 of IPC.

The Court remarked that there is an increase in sexual offences against children. There is a very adverse impact of the incident on the victim girl, on her family members and even on the society. They are under the impression that house and nearby vicinity are not safe for children and it is going to cause an alarming situation in society. Definitely, such type of incident causes terror in the mind of people, victim and her family members and leave scar for longer time.

Dhananjay Singh, Advocate, for the Accused.

Madras High Court: K Murali Shankar, J. quashed the proceedings initiated against an advocate who happens to be the counsel of the accused in a case sub-judice in a Court of law. The Court reprimanded the practice of implicating advocates as accused, as in the given case the advocate accompanied the Advocate Commissioner to the disputed suit property which forms the subject matter of a sub-judice case and implicated for offences such as trespass, theft and criminal intimidation.

The petitioner is a practicing Advocate in the Courts at Dindigul for the past 29 years and he is the Counsel on record for the accused Balaguru and Leelavathy in title dispute sub-judice in a Court of law. The case of the prosecution is that when the defacto complainant and his family members went to Trichendur, all the five accused broke open the door of the defacto complainant’s house, trespassed into the house and had stolen Rs.1, 00,000/- cash, one laptop and some documents, that when the defacto complainant and his wife returned to their home from Trichendur, they were prevented from entering into their house and that the accused Leelavathi and Balaguru had caused criminal intimidation.

F.I.R was registered for the offences under Sections 147, 454, 380, 341 and 506(i) Penal Code, 1860 (‘IPC'), against 5 persons including the petitioner, charge sheet was filed and non-bailable warrant (‘NBW') was issued against the petitioner after showing him to be an absconding accused. Thus, an instant petition was filed by the petitioner under Section 482 Criminal Procedure Code (CrPC) for quashing the proceedings.

Based on alteration report filed by Sub Inspector before the Court, the Court observed that the alleged complaint of stealing cash, laptop and other documents was not true, that there was no stealing of such articles and that the defacto complainant with an evil intention to implicate the accused with theft case has raised false allegations.

The Court noted that a new trend has been emerging in implicating the Advocates as accused along with their clients with ulterior motive of achieving the intended result quickly or immediately. Thus, the Court held “permitting the prosecution to proceed against the petitioner is totally unwarranted and the same would amount to be an abuse of process of the law.”

Mr. K. Sanjai Gandhi, Government Advocate, for the Respondents(Crl. Side).

Himachal Pradesh High Court: Sandeep Sharma, J. allowed the bail petition of the appellants who were charged for intentional insult to provoke breach of peace and criminal intimidation with threat to cause death or grievous hurt under Sections 504 and 506 of the Penal Code, 1860 and Section 3(1)(s) of Scheduled Castes and the Scheduled Tribes (Prevention of Atrocities) Act, 1989.

The learned Additional Advocates General for the respondent, Sudhir Bhatnagar and Sanjeev Sood, contended that the appellants herein were fully cooperating with the investigation and nothing remained to be recovered from them. Also, the reports suggested that despite several attempts by the investigating authority the complainant was not coming forward to associate with the investigation.

High Court relied on Dataram Singh v. State of Uttar Pradesh, (2018) 3 SCC 22 and held that a person is presumed to be innocent unless found guilty and hence his freedom cannot be curtailed for an indefinite period. Further reliance was placed on Sanjay Chandra v. Central Bureau of Investigation, (2012) 1 SCC 40 and it was held that gravity of the offence cannot be a decisive ground to deny bail, and the object of bail is just to secure the appearance of the accused, and the objective thereof is neither punitive nor preventive.

The Court after considering the cooperation of the appellants in the investigation and other relevant facts ordered the appellants to produce bail bonds of 25,000 each and allowed the bail petition. [Jagdish Sharma v. State of Himachal Pradesh, 2019 SCC OnLine HP 1403, decided on 30-08-2019]

Bombay High Court: S.S Shinde, J. allowed a criminal application to the order passed by the Judicial Magistrate (First Class) issuing process against the applicant for the offences punishable under Section 504 (intentional insult with intent to provoke breach of the peace) 506 (punishment for criminal intimidation) of the Penal Code.

Swapnil S. Mhatre, Advocate for the applicant submitted that she was not residing within the jurisdiction of the Magistrate concerned, and therefore, in view of the mandate of Section 202 CrPC, the Magistrate was required to cause an inquiry as contemplated under the said section and pass a reasoned order. Reliance was placed on Abhijit Pawar v. Hemant Madhukar Nimbalkar, (2017) 3 SCC 528.

Per Contra, Kaushik Jayant instructed by Amol P. Mhatre along with Mandavkar, Advocates for the respondent in-laws opposed the instant applicant.

“Certainly, the course adopted by the Magistrate is not keeping in view of the observations made by the Supreme Court in para 12 of the judgment in the case of Abhijit Pawar. In facts of the present case, the applicant-accused is residing outside the jurisdiction of JMFC, Thane and therefore, it was incumbent upon the Magistrate to cause the inquiry himself or entrust the said task with concerned Police Officer. However, the Magistrate by cryptic order proceeded to pass the impugned order.”

In such view of the matter, the High Court quashed the impugned order passed by the Judicial Magistrate (First Class). The complainants were given liberty to approach the Court concerned afresh for redressal of their grievance.[Amruta Ajay Mane v. Ramesh Dhodiba Mane, 2019 SCC OnLine Bom 1717, decided on 26-08-2019]