Professor Dr Raka Arya has been recently nominated as a member of the 22nd Law Commission. She has been serving as a Professor at the National Law Institute University Bhopal and has held various other portfolios over the years.

She has been interviewed by Divyansh Moralia, EBC/SCC Online Student Ambassador who is currently pursuing law from NLIU, Bhopal.

Q.1. Could you please introduce yourself and tell us a little about your educational background and your experience as an academician?

A. I completed my LLB from Aligarh Muslim University, Aligarh, after which, I went on to do postgraduation from Dr Bhimrao Ambedkar University, Agra. Subsequently, I pursued my PhD at the Jawaharlal Nehru University, Delhi. I specialise in “international studies,” and have conducted research with a major emphasis on the “European Aspects of International Studies”.

I started my career at Vasanta College, Rajghat, Varanasi, where I served as a teacher of political science for a period of 3 years. Subsequently, I joined the National Law Institute University Bhopal, where I have been serving for the last 19 years. Over this duration, I have held several offices such as the Chief Wardens Dean of Student Welfare, etc.

I have also had the experience of acting as a “litigator” in the District Court for a period of three years, and I have constantly been in touch with civil society groups and government agencies, where I have worked for legal literacy and gender issues.

Q.2. You have been serving as a professor for a considerably long time, how have your interactions with your students been, and do you believe that any of those interactions also affect your thinking and opinions?

A. My students have constantly played a very significant role in my life, it would not be incorrect if we say that my students are my lifeline. My interaction with them gives me a perspective and it refreshes my views. No doubt, my students have helped me form my thinking and opinions and my interactions with them have affected the same. I am of the belief that the interaction between a student and the teacher is always two-way traffic, wherein both of them get to learn from such interactions.

Q.3. The Government of India has nominated you as a member of the 22nd Law Commission, what do you think are the responsibilities that this entails for you, especially considering that the Law Commission has been reconstituted after a considerable gap of 4 years?

A. As a member of the Law Commission, my responsibilities are immense, and I realise the same. We will have to rigorously work upon the existing as well as the upcoming laws. The Government has entrusted me with this responsibility and I would take it seriously to live up to those expectations. I am of the view that I would be fulfilling these responsibilities to the best of my abilities.

Q.4. In the 22nd Law Commission, you will be working with Justice Ritu Raj Awasthi and other well-known figures in their respective field such as Professor D.P. Verma. Do you look forward to the interactions that will be taking place in the Commission and what are your expectations from such an experience?

A. I feel deeply privileged and honoured to have the opportunity of working with such stalwarts. I would be learning a lot from my interactions with these people in the Law Commission. There would be challenges but I am looking forward to the experience and I would enjoy every moment of the same.

Q.5. One of the major issues which are scheduled to come to the Law Commission for deliberation is the proposal for the Uniform Civil Code. What are your views on this issue?

A. I am of the view that the Uniform Civil Code is an idea which has already been floated in the public. The intention behind the same is to promote cohesiveness and the step is important for this purpose.

However, in doing so, it must be ensured that there should not arise any dichotomy. The step should be taken in such a manner as to uphold the spirit of the Constitution and it should be based on the ideas of harmony and co-existence.

Q.6. One inherent responsibility which lies upon the Law Commission is to ensure that the directive principles of State policy are to be taken care of. In today's world, a considerable amount of emphasis is laid upon fundamental rights, however, these duties are often ignored. What are your views on this issue and how can it be solved?

A. I am of the view that fundamental rights are not different from the directive principles of State policy, rights and duties always go hand in hand. Part IV of the Constitution, which lays down the directive principles of State policy lays down the idea of “common good” and it ought to be followed in order to protect the intention of the Constituent Assembly.

Rights and duties should go in perfect harmony in order to ensure the proper functioning of society.

Q.7. You have been a constant source of inspiration for your students and other youngsters. Would you like to give any message to the readers of the interview, which mainly consists of young law students and law aspirants?

A. My message to law students and other youngsters would be that they should always think in terms of their duties towards society. These students are our future, and they should make constant efforts to give back to society.

The youngsters should focus on their studies and engage in value-based activities, as this has the potential to contribute to the larger aim of nation-building. 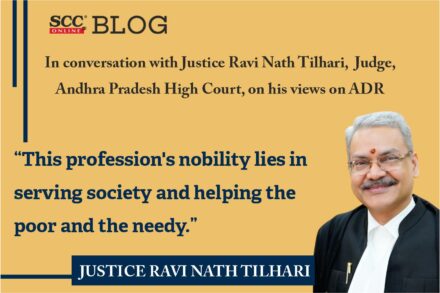 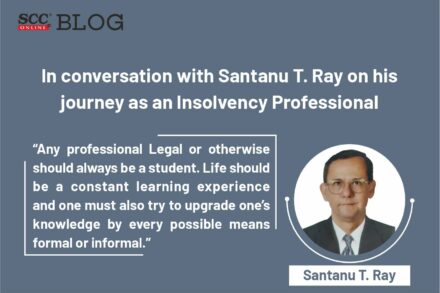 “Life should be a constant learning experience and one must also try to upgrade one’s knowledge by every possible means formal or informal.” says Santanu T. Ray 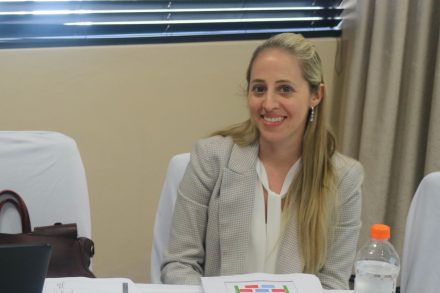