Supreme Court: The bench of CT Ravikumar* and Sudhanshu Dhulia, JJ  has held that merely because some of the convicts had died during the pendency of the case, it would not lead to non applicability of the provision for constructive/vicarious liability, arising out of the achievement of the common object by the unlawful assembly.

The Court was deciding the case where ten persons were convicted for committing offences under Sections 324/149 and 323/149. They jointly filed an appeal before the Allahabad High Court. However, during the pendency of the appeal seven of them died and consequently, qua them the Appeal was dismissed as abated. The appeal of the remaining three was dismissed and the conviction and the sentences were confirmed. Only two out of these three jointly preferred an appeal before the Supreme Court but one of them died.

The Question before the Court was whether the reduction in number of the convicts below five on account of death of the co-accused got any impact or effect on the surviving convict(s) in the matter of consideration of his/their, vicarious liability in view of Section 149, I.P.C.

Answering the issue, the Supreme Court observed that there can be no two views on the position that reduction of number of accused/convicts in an appeal, below five on account of acquittal of co-accused/co-convicts and such reduction in numbers below five due to death of co-convicts are different and distinct.

While, the term ‘abatement’ or ‘abate’ has not been defined in Cr.P.C., as per Black’s Law Dictionary, 10th Edition, abatement means ‘the discontinuation of criminal proceedings before they are concluded in the normal course of litigation, as when the defendant dies’.

Hence, an appeal against conviction (except an appeal from a sentence of fine) would abate on the death of the appellant as in such a situation, the sentence under appeal could no longer be executed. The abatement is certainly different from acquittal and a mere glance at the proviso to Section 394 (2), Cr.P.C., will make this position very clear.

Applying the law on the case at hand, the Court observed that the mere fact that seven out of the ten convicts died, either during the pendency of Criminal Appeal before the High Court or during the pendency of appeal before the Supreme Court, could not be a reason, by that itself, to canvass non applicability of the provision for constructive/vicarious liability, arising out of the achievement of the common object by the unlawful assembly.

The Court confirmed the finding of the High Court after observing that the very fact that the members of the unlawful assembly, ten in numbers assembled at the place armed not only with firearms but with other lethal weapons as well and the manner in which they committed the violence and killed one Dalip Singh over a property dispute, would definitely lend support to the said finding. 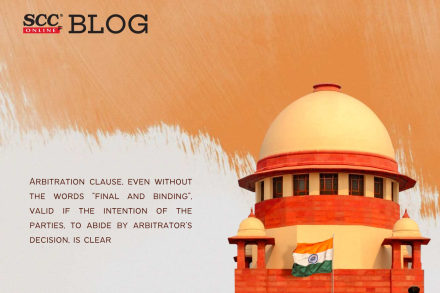 Arbitration clause, even without the words “final and binding”, valid if the intention of the parties, to abide by arbitrator’s decision, is clear: Supreme Court

By Prachi Bhardwaj Published on September 10, 2022

Cal HC | Trafficking in garb of child marriage or child labour are more disturbing due to the family members involvement; Exodus of migrant labourers due to pandemic have exposed younger children to be trafficked for sustenance