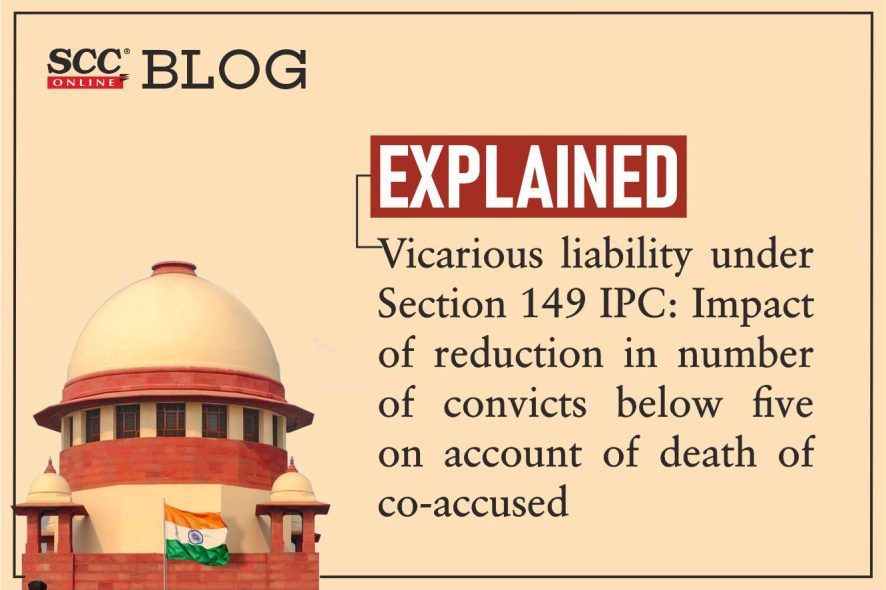 Supreme Court: The bench of CT Ravikumar* and Sudhanshu Dhulia, JJ  has held that merely because some of the convicts had died during the pendency of the case, it would not lead to non applicability of the provision for constructive/vicarious liability, arising out of the achievement of the common object by the unlawful assembly.

The Court was deciding the case where ten persons were convicted for committing offences under Sections 324/149 and 323/149. They jointly filed an appeal before the Allahabad High Court. However, during the pendency of the appeal seven of them died and consequently, qua them the Appeal was dismissed as abated. The appeal of the remaining three was dismissed and the conviction and the sentences were confirmed. Only two out of these three jointly preferred an appeal before the Supreme Court but one of them died.

The Question before the Court was whether the reduction in number of the convicts below five on account of death of the co-accused got any impact or effect on the surviving convict(s) in the matter of consideration of his/their, vicarious liability in view of Section 149, I.P.C.

Answering the issue, the Supreme Court observed that there can be no two views on the position that reduction of number of accused/convicts in an appeal, below five on account of acquittal of co-accused/co-convicts and such reduction in numbers below five due to death of co-convicts are different and distinct.

While, the term ‘abatement’ or ‘abate’ has not been defined in Cr.P.C., as per Black’s Law Dictionary, 10th Edition, abatement means ‘the discontinuation of criminal proceedings before they are concluded in the normal course of litigation, as when the defendant dies’.

Hence, an appeal against conviction (except an appeal from a sentence of fine) would abate on the death of the appellant as in such a situation, the sentence under appeal could no longer be executed. The abatement is certainly different from acquittal and a mere glance at the proviso to Section 394 (2), Cr.P.C., will make this position very clear.

Applying the law on the case at hand, the Court observed that the mere fact that seven out of the ten convicts died, either during the pendency of Criminal Appeal before the High Court or during the pendency of appeal before the Supreme Court, could not be a reason, by that itself, to canvass non applicability of the provision for constructive/vicarious liability, arising out of the achievement of the common object by the unlawful assembly.

The Court confirmed the finding of the High Court after observing that the very fact that the members of the unlawful assembly, ten in numbers assembled at the place armed not only with firearms but with other lethal weapons as well and the manner in which they committed the violence and killed one Dalip Singh over a property dispute, would definitely lend support to the said finding.

A house was being constructed on land stated to be of the victim named Abdul Wahab and others when the accused persons came in a mob towards the house of the victim armed with lathis, spears, daggers, etc. The victim tried to escape by taking shelter in the house of one Shorab Ali but did not succeed as the house was surrounded, walls of the house were broken and a mounted assault made on the victim. Different accused were assigned different roles to the extent of the weapon they wielded. The body of the victim was then carried and disposed of by throwing in the river Brahmaputra.

Charges were framed against the accused under Sections 147/148/324/302/201 read with Section 149 of the IPC and the Sessions Judge convicted all the 32 accused and sentenced them to life imprisonment vide judgment dated 8.5.2015.

The Supreme Court, in the case at hand, was only concerned with the appeal filed by Taijuddin, one of the accused, claiming that his role was only of having pointed out the house where the victim was hiding.

The Court considered the following key factors while deciding the case:

The Court noticed that the only evidence of his involvement is that he pointed to the house where the victim was hiding.

“Given that a murderous mob fully armed was hunting for him, the appellant at best can be said not to be brave enough to conceal the deceased or even to have not pointed out where he was, but that by itself cannot rope in the appellant under Section 149 of the IPC.”

In Subal Ghorai v. State of West Bengal, (2013) 4 SCC 607, the Supreme Court had held that constructive liability cannot be stretched to lead to the false implication of innocent bystanders. The Court considered the possibility of often people gathering at the scene of offence out of curiosity but that did not make them share the common object of the assembly. The Court held that,

Considering the aforementioned law laid down by the Supreme Court and the facts and material before the Court, it was held that the case against the appellant was not proved beyond reasonable doubt. In fact, no case seemed to have been proved against the appellant given the role assigned to him in the testimony of the witnesses. The accused was, hence, entitled to a clean acquittal in the given facts.