Madras High Court: In an application seeking the appointment of the applicant as a fit and proper person to be guardian of the minor children and for grant of sole and permanent custody of the minor children, Krishnan Ramasamy, J. has directed the father/respondent to hand over interim custody of the children to the mother/applicant, till the disposal of the main original petition.

In this case, the applicant and respondent got married in the year 2009 and have 2 children. Thereafter, matrimonial disputes arose between the parties, and the wife was subjected to harassment and was thrown out of the matrimonial home in 2021 by the respondent, while he retained the custody of the children. Thereafter, the applicant filed various petitions and applications, seeking dissolution of marriage, custody of minor children and visitation rights etc.

The Court noted that this Court by various orders has granted the visitation rights to the applicant to ensure that the well-being of the children be unaffected by the estranged and strained relationship of the parents, however, the respondent has failed to comply with the said orders. Further, the respondent has even indulged in parental alienation and tutored the children to act and behave contrary to the wishes of the applicant and according to the respondent. He has even updated the children about the Court proceedings, which prompted the elder son to act against the mother and to resist to stay with her, and to demand from her to withdraw the case filed against his father.

The Court observed that without parental alienation, this could not be possible for a tender aged child to insist and demand his mother to withdraw the case and impose the condition that unless she withdraws the case, he would not come to his mother.

The Court further observed that the respondent is throwing the blame on the children stating that the children themselves are not interested in going and staying with the mother and that he cannot force them, and it is beyond his hands; also, in the Court orders there is no specific role mentioned directing the respondent to act in the matter of convincing and handing over the children to the applicant. This clearly proves the aspect of parental alienation on the part of the respondent. Further, his inability to advise and persuade the children, further evidents his inability and incapability to maintain and keep the custody of the children anymore.

Moreover, the Court viewed that “to turn a child against a parent is to turn a child against himself. Parental alienation is inhuman, and it is a menace to a child, who directly needs two hands to hold, both the mother and father till he/she walks throughout the life or at least till he/she attains majority” Further, it was observed that hatred is not an emotion that comes naturally to a child against his/her mother/father unless it is taught by the person whom the child believes. A parent indulging in parental alienation means he/she is polluting the tender mind of the innocent child by portraying the mother/father as a villain, which would have a considerable impact on him/her throughout his/her life.

The Court observed that “the welfare of the child is of paramount consideration but being with the parent who is not ready to teach and persuade his children to love their own mother, cannot be accepted. Further, it is not fair on the part of the respondent in not accommodating the children to spend time with their mother despite the Court orders.

Moreover, the Court observed that “children have a fundamental right and need for an unearthened and loving relationship with their parents and denying the said right would amount to child abuse” and the respondent, without justification, has been indulging in such child abuse. It was observed that when there is healthy co-parenting, the children will lead a happier childhood instead of becoming an emotionally broken adult who will in turn become non-understanding and unsympathetic citizens.

The Court further viewed that the welfare of a child is not to be measured only by money and physical comfort, as it includes material welfare; however, they are secondary matters, the primary considerations of matters are the stability and the security, the loving and understanding, care and guidance, warm and compassionate relationships that are essential for the full development of the child’s own character, personality and talents.

Further, the Court observed that it appears prima facie that the respondent poisons the minors’ minds against the mother and acted against the welfare of the minors and for the healthy growth of the children, their custody was discontinued with the respondent as there is very high probability that if the children continue to stay with him, they will be influenced to such an extent that they will never want to return to their mother, it will cause mental and physical disorders including psychological pain, anger and depression, which would certainly cause harm to the welfare of the child.

The Court also observed that it is incumbent upon a parent, having the custody of the children, to encourage co-parenting despite having personal hatred towards the spouse and allow the children to move freely with their parent, as the quality of the relationship between the co-parents have a strong influence on the mental and emotional well-being of the children.

Moreover, the Court observed that “the concept of marriage is not for mere satisfying carnal pleasure, but it is mainly for the purpose of Pro generation, which leads to the extension of the families of the two individuals, who have been united over a sacred oath, taken by both”. Further, it was observed that the law can satisfy the ego, but it can never satisfy the requirements of the child, as the framers of the law were only conscious of the welfare of the child and not on the mental turmoil that would be faced by a child in such a calamitous situation.

The Court further viewed that in matters relating to custody of children, primarily, the Court will consider the welfare of the children and decide which parent is suitable to look after the child in a better manner by providing them all necessary facilities and comforts, however, what the Court cannot evaluate is, whether the child feels happy only with one parent, ultimately, the child is the silent sufferer, having lost the love and affection of another parent. Thus, taking into consideration the welfare of the child, the Court granted interim custody to the mother/ applicant. 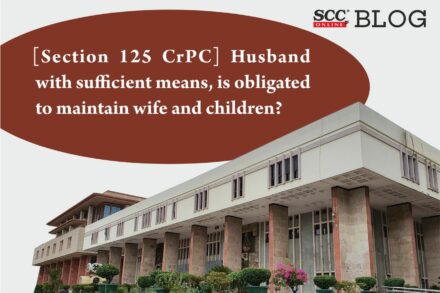 Ker HC | “Child molestation is a shame on society; but if the allegations are false, it is lethal to the life of the accused”; HC acquits father accused of raping his minor daughter