Gauhati High Court:In a case relating to suo motu Public Interest Litigation (PIL) against the police atrocities, which took place at Paltan Bazar, Guwahati City on 17.03.2022, the division bench of R.M. Chhaya, CJ. Soumitra Saikia, J. has observed that Police may have the authority to control the traffic but the same cannot be handled as a tool to violate the fundamental rights of the citizen. Further, the steps taken by the authorities against the erring police personnel do not end the agony of the citizens at large, and if there is any breach of traffic rules, the police personnel could have taken an action in accordance with law instead of using force on the innocent citizens and issued certain directions to the State authorities.

In this case, the victim was riding a two-wheeler along with his wife and his three-year-old child at Paltan Bazaar, Guwahati. On an allegation of a minor traffic violation, the Police Constable on duty assaulted him and a heated argument took place leading to a brawl. Such action of the constable involved in the incident was captured on camera and had also gone viral on social media. Moreover, a First Information Report (FIR) was lodged against the bike rider for alleged offences under Sections 294, 341, 353 and 325 of the Penal Code, 1860 (IPC) and also, against the constable under Sections 294, 325, 34 of IPC. The respondent authorities have taken departmental action against the constable and suspended him from service, pending the enquiry.

The Court observed that “we stay in a society where rule of law prevails and, therefore, it is eminently necessary for the respondent authorities to impart appropriate training to their police personnel and make them citizen centric while discharging their duties”. It further noted that the allegations levelled against the victim were without any foundation.

(i) To impart training to all Police Constables, who are handing traffic in cities, more particularly at all district levels, to remain citizen centric.

(ii) To educate the police personnel about their rights and responsibilities as a public servant.

(iii) To impart appropriate basic knowledge of law by conducting training of police personnel by taking help and guidance of the Assam State Legal Services Authority (ASLSA) for the same.

(iv) To constitute a committee for the same also consisting of the Member Secretary, Assam State Legal Services Authority (ASLSA) in order to avoid any such similar incident in future. 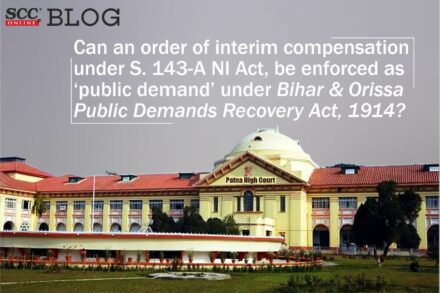 Can an order of interim compensation under S. 143-A NI Act, be enforced as ‘public demand’ under Bihar & Orissa Public Demands Recovery Act, 1914? Pat HC explains

NCLAT | Relief for Consortium of Banks which extended loans to Jaiprakash Associates, NCLT order cancelling mortgage of 858 acres of land by JIL in favour of Banks quashed