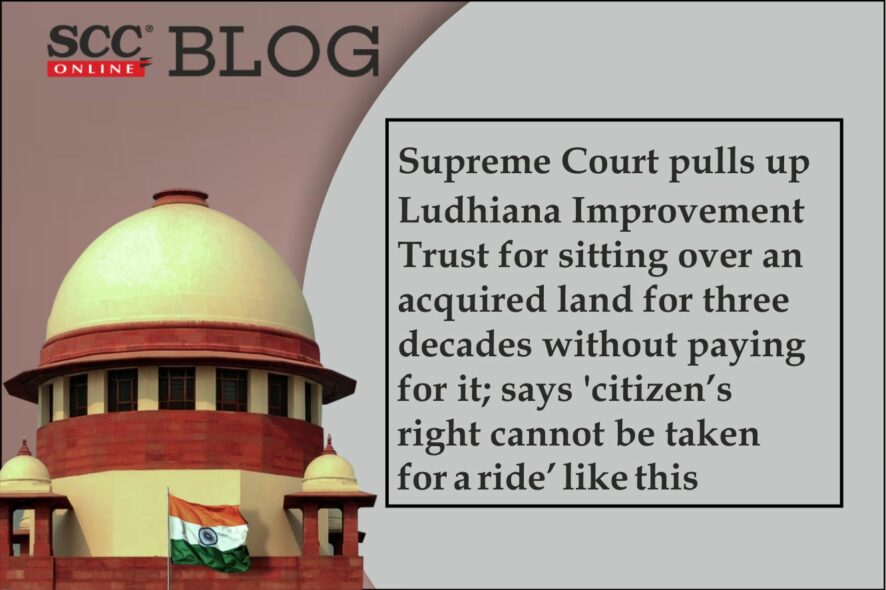 Supreme Court: In a dispute about the non-payment of acquired land under the Land Acquisition Act, 1894 that has spanned over more than three decades, the 3-judge bench of Sanjay Kishan Kaul*, S. Ravindra Bhat and MM Sundresh, JJ has held that the dragging of the proceedings for three decades have been a grave injustice to the appellant, who have been deprived of the enjoyment of the property despite having paid the full auction price 30 years back. Also, merely because the Respondent is an Improvement Trust, it does not give it a licence to take a citizen’s right for a ride.

In the case at hand, the land was acquired by the Ludhiana Improvement Trust but the compensation determined was not acceptable to the land owners, thus, reference was sought in terms of Section 18 of the LA Act. The Land Acquisition Tribunal made an award enhancing the compensation to the owners by determining the compensation as Rs.4,27,068/- along with future interest at 9%, per annum, from the date of the application. The Respondent Trust, however, did not pay the amount while it continued to enjoy the land.

Consequently, the land was attached and the Court of Civil Judge, Ludhiana, issued a warrant for sale of the attached property, which was eventually sold to the Appellant by way of auction conducted by the Court Auctioneer on 12.08.1992 for a consideration of Rs.22.65 lakhs. The Respondent Trust apparently woke up only thereafter and on 26.09.1992 filed an application before the Court of the Senior Sub Judge, Ludhiana, under Order XXI Rule 90 of the said Code to set aside the ex parte attachment and auction of the Trust’s property. Even during this period of time it is not as if the payments were made to the land owners.

The Supreme Court observed that though the right in property is not a fundamental right, it is still a constitutional right under Article 300A of the Constitution of India. Thus, a person can be deprived of the rights of the property only in a manner known to law.

In the case at hand, the acquisition proceedings in respect of the land in question sought to deprive the owners of their land which had to be paid for in terms of the provisions of the LA Act. The amount of compensation was determined by the reference court under Section 18 of the LA Act and the matter was not taken further.

“Thus, both the owner and acquiring beneficiary agreed to the compensation as determined by the Tribunal. The next step should have been to immediately pay the amount to the owners which did not happen. On the other hand, the owners were made to run from pillar to post and ultimately the execution proceedings were filed six years after the amount had been so determined. This conduct of the Respondent Trust itself is not condonable and this is what resulted in the proceedings for execution, the auction and the matter being dragged on for decades.”

The Court, further, made clear that the fact of the first execution petition being dismissed as not satisfied will not preclude filing of the second execution petition giving details of the property. The Court noticed that the execution proceedings have to proceed in accordance with the various stages as envisaged under Order XXI of the said code and those stages were duly followed. In those proceedings also the Respondent Trust chose to absent itself.

It was observed that just because the ultimately the property fetched a larger price, it cannot be held against the Appellant who participated in the process and offered the appropriate price, which was accepted. The Respondent Trust did not even comply with the requirement of Order XXI Rule 89 by depositing the decretal amount along with 5 per cent of the auction amount.

“The Respondent Trust behaved as if it had some superior right to appropriate the property of the owners without paying for it contrary to the mandate of the LA Act. That would be hardly called a case of fraud in such a situation.”

Also, the dual test of material irregularity of fraud and substantial injury under Order XXI Rule 90 was not satisfied in the present case. The Respondent Trust cannot be permitted to say that merely because the property was auctioned there is some substantial injury. No doubt there were some structures shown in the site plan itself, however, they were merely basic structures of a godown and a quarter.

On the issue of execution of proceedings, the Court said that,

“It is often said in our country that another legal battle, more prolonged, starts in execution proceedings defeating the right of the party which has succeeded in establishing its claim in civil proceedings. This is exactly what has happened in the present case. The various stages of Order XXI of the said Code when violated cannot given right to some extra indulgence merely because the Respondent Trust is an Improvement Trust. There cannot be a licence to prolong the litigation ad infinitum.”

Hence, deciding against the Respondent Trust, the Court observed that it hoped that at least now the Appellant would be able to get the benefit of using the land they purchased three decades ago.

Ker HC | Ensure no new flag masts and posts be permitted to be brought on to the roads and public spaces; HC directs Kerala government