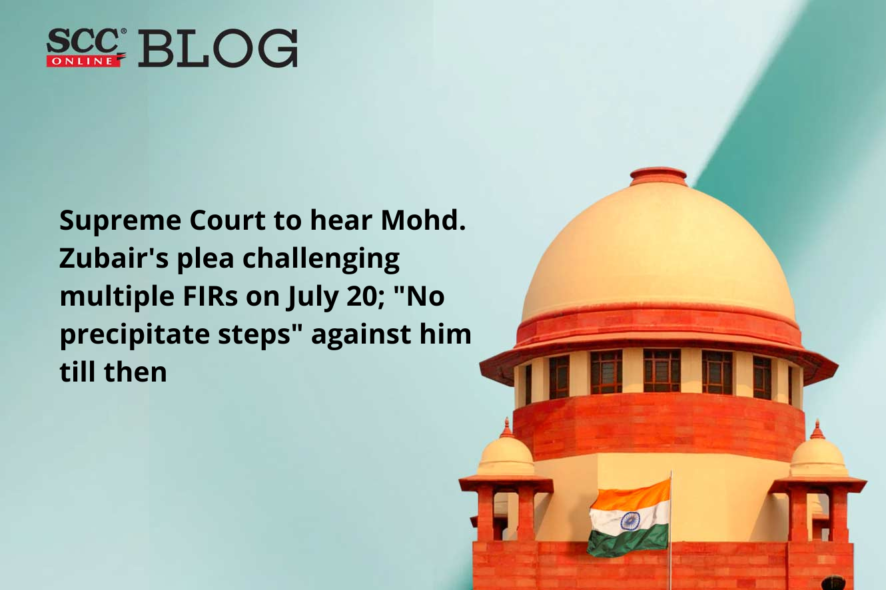 Supreme Court: When the matter relating to multiple FIRs being registered against Alt-New co-founder and fact checker Mohammed Zubair was urgently mentioned before the bench of Dr. Dy Chandrachud and AS Bopanna, JJ, the Court listed the matter for hearing on July 20, 2022 but directed that,

“no precipitate steps shall be taken against the petitioner in connection with any of the five FIRs which have been extracted above, without the leave of this Court.”

The grievance before the Supreme Court is that multiple FIRs have being registered against Zubair on essentially the same subject matter in different police stations. Most of the FIRs implicate offences (Sections 153A, 295A and 298 IPC and Section 67 IT Act) which are punishable for up to three years’ imprisonment. It has been alleged that Zubair’s tweets and facts checks have not only mocked journalists but also hurt religious sentiments.

It is important to note that Zubair has been granted regular bail on 15 July 2022 by the Additional Sessions Judge, Patiala House Courts, Delhi in connection with one FIR dated 20 June 2022 lodged in Delhi. Also, he was directed to be enlarged on interim bail by an order dated 8 July 2022 passed by the Supreme Court in connection with another FIR dated 1 June 2022 lodged at District Sitapur, Uttar Pradesh for a period of five days. The order has since been extended, pending further orders of this Court. Zubair has also been directed to be produced before the Court at Hathras in Uttar Pradesh.

Bom HC | Appellate Authority for GST has jurisdiction to advert to ‘new grounds’ in support of its decision, that were not raised before the Advance Ruling Authority

Limitation period to file appeal under Section 107 of UP Goods and Services Tax Act, 2017 starts from when order aggrieved against was communicated