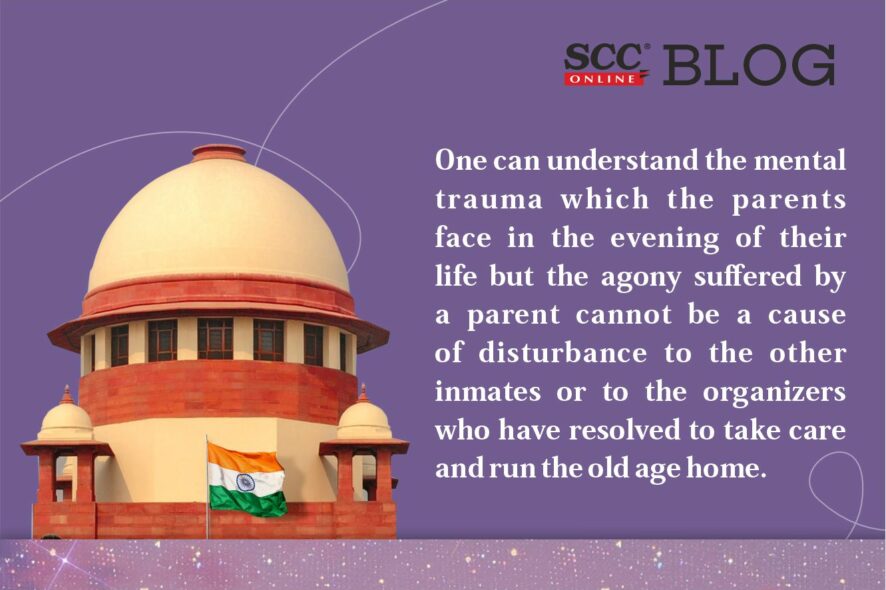 Supreme Court: In a case where an old age home inmate was accused of misbehaving with other inmates and was hence, asked to vacate the room, the bench of Hemant Gupta* and V. Ramasubramanian, JJ has held that if one parent is the cause of disruption of peace of other inmates in the old age home, the administration of the old age home is at liberty to terminate the license and ask the inmate to vacate the room allotted to them.

In the case at hand, after receiving several complaints against the respondents for allegedly misbehaving with the other inmates, the Committee of the Old Age Home at first took a compassionate approach and allowed one month’s time to the respondents so as to observe their behaviour. If no reforms were visible then, they would be told to leave the premises in terms of Rule framed by the old age home. Since no behavioral change was visible, the Old Age Home cancelled the membership of the respondents on 22.11.2019.

While the Allahabad High Court granted injunction against such order, the Supreme Court was of the opinion that since the respondents had no legal right to protect their possession without complying with the corresponding obligations, as their possession is not a legal possession but only a permissive possession, they cannot seek any injunction to restrain the management of the old age home not to dispossess them.

“It is an unfortunate situation when the parents cannot be taken care of by the children, but the fact remains that abandonment of parents by their children is now a hard fact of life. Parents do find it difficult to reconcile the situation that at that age they have to stay in old age home. Therefore, one can understand the mental trauma which the parents face in the evening of their life but the agony suffered by a parent cannot be a cause of disturbance to the other inmates or to the organizers who have resolved to take care and run the old age home.”

It was held that the inmates in the old age home are licensees and are expected to maintain a minimum level of discipline and good behaviour and not to cause disturbance to the fellow inmates who are also senior citizens. Therefore, if one parent is the cause of disruption of peace of other inmates in the old age home, the administration of the old age home is at liberty to terminate the license and ask the inmate to vacate the room allotted to them. Even if the organizers of the old age home are not able to meet the expectation or requirements of the plaintiffs, that would not confer a cause to the plaintiffs to disturb the other inmates. As a licensee, the respondents have no right to stay in the accommodation allotted which is purely an approach to a human problem faced by the people in old age. It is also important to note that the respondents have even been offered alternative accommodation as well.

The Court hence directed that the appellant shall arrange an alternative old age home for the respondents, as one offered by the Social Welfare Department.

Further, it will be open to the Municipal Corporation or the Social Welfare Department to examine the living conditions of the inmates in the old age home so that the inmates live in as comfortable conditions as are possible at that age.

If directly elected Sarpanch acts in a manner rendering functioning of Panchayat at a standstill, would member of panchayat get right to move motion of ‘no confidence’? Bom HC explains