Court of Appeal of the Democratic Socialist Republic of Sri Lanka: The Division Bench of N. Bandula Karunarathna and R. Gurusinghe, JJ. allowed an appeal which was filed assailing the judgment delivered by the Judge of High Court of Homagama by which accused-appellant was convicted and sentenced to 7 years’ rigorous imprisonment for having committed culpable homicide not amounting to murder of an infant.

The accused-appellant had pleaded guilty of committing offence of murder of an infant who was a new born, an offence punishable under Section 296 of the Penal Code but the High Court Judge decided to commence the trial considering that she pleaded not guilty and opted for a non-jury trial. On behalf of the accused-appellant, her willingness to plead guilty to culpable homicide not amounting to murder under Exception 5 to Section 294 of the Penal Code, was indicated. The State Counsel who prosecuted the trial in the High Court conceded the mitigatory circumstances which the appellant relied on, to bring the case against her within the ambit of the said exception. After plea bargaining, the accused pleaded guilty under exception 5 to Section 294 and in her plea, the trial Judge convicted the appellant for the lesser offence of culpable homicide not amounting to murder punishable under Section 297 of the Penal Code.

SSC appearing on behalf of the respondent informed the court that she is objecting to the application of the accused-appellant as the said act was a grave offence as the deceased in this case is a one-day-old infant who was found alive, abandoned near a shrub jungle. The accused-appellant had been identified as the biological mother of the deceased infant through DNA analysis and the relevant DNA report. The deceased infant had sustained several injuries identified as animal bites on the knees and face. It was revealed that the injuries found on the face and limbs are consistent with the ante -mortem injuries sustained after the live birth due to animal attack and ant bites.

Counsel for the appellant states that, following this unfortunate incident, her husband deserted her leaving the burden of both her children aged 11 and 14 on her shoulder. The appellant grieved that, if she was incarcerated in the execution of the custodial sentence imposed on her, her daughter would run the risk of her whole life further being disrupted and disorganised.

After hearing both the parties, the Court was of the view that the Trial Judge, in assessing a proper sentence for the appellant, has not duly appreciated the post conduct of the appellant by which she did not attempt to exonerate her. The appellant herself identified the dead body of the baby before Judicial Medical Officer, and confessed to the police. Then she readily surrendered to genus comparison thereby facilitating to truncate of what otherwise would have followed a daunting, prolonging and complex investigation process and demonstrating her remorse from the earliest. The appellant had pleaded guilty to the indictment at the very instance. During the trial, she did not raise any affirmative defence.

The Court held that since she has no previous convictions, the accused-appellant should be given some relief by this court and considering the circumstances of the case the Court decided to impose years of rigorous imprisonment instead of 7 years and suspend it for 10 years from today which would allow the appellant to re-integrate with the society.[Gamwarige Premawathie v. Attorney General, CA/HCC/ 225/2020, decided on 06-05-2022]

Kasun Liyanage AAL for the Accused-Appellant 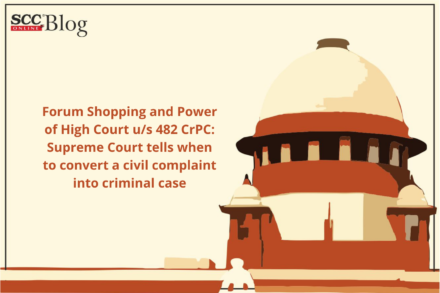 Charging of registration fee beyond the authority conferred upon State under Indian Forest Act and the Rules: All HC

Ker HC | From promotions to vacancies, even where there is no direct recruitment, the 3% quota for disabled persons has to be complied with; HC reiterates