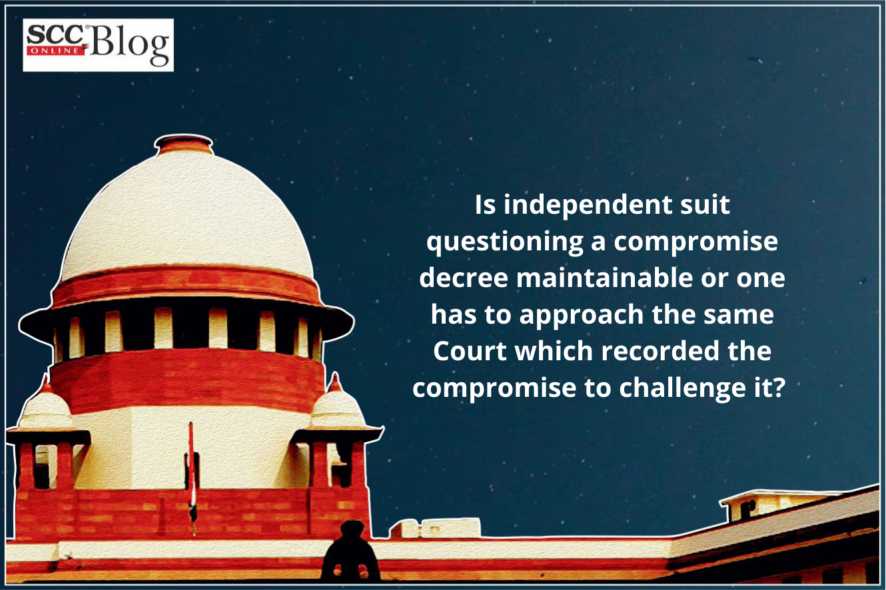 Brief facts of the case were such that the suit schedule property was gifted to the respondent 1–original plaintiff during his minority by his paternal grandmother, respondent 2 vide registered Gift Deed dated 13-02-2003, however the deed was revoked on 10-12-2004 and thereafter a registered Development Agreement-cum- General Power of Attorney dated 18-01-2008 came to be executed between the grandmother and the appellant–M/s. Sree Surya Developers and Promoters. Under the said Development Agreement, the grandmother was entitled to 35,000 sq. ft. of fixed saleable super built-up area along with proportionate number of car parking spaces and undivided share in the land.

The father of the respondent 1 filed a suit as the next friend of then minor respondent 1 seeking for declaration that revocation of Gift Deed as being illegal and not binding on the plaintiff therein and also for perpetual injunction. Subsequently, a compromise was arrived at between the parties vide Compromise Deed Dated 30-12-2015 under which it was agreed that the respondent 1 would be entitled to entire 35,000 sq. ft. of the constructed area and the Developer would be entitled to assign the development rights accrued to it under the said Development Agreement to the third parties. Thereafter the appellant–Developer assigned its development rights to respondent 4 and on the basis of the same, the respondent 4 had started developing the subject property.

On attaining the age of majority, the respondent 1 filed a suit before the Trial Court praying inter alia declaration of right, title and interest over the suit schedule property and declaration of Compromise Decree. He also prayed the revocation of deed as null and void.

The Bench observed that the High Court had not at all dealt with and considered the provisions of Order XXIII Rule 3A CPC and had not considered whether in fact the suit challenging the Compromise Decree and/or for the reliefs sought in the suit would be maintainable or not. The Bench opined,

Rejecting the argument of the respondent that he had not specifically prayed for setting aside the Compromise Decree and what was prayed was to declare that the Compromise Decree was not binding on him and that for the other reliefs sought, the suit would not be barred, the Bench held that a mere clever drafting would not permit the plaintiff to make the suit maintainable which otherwise would not be maintainable and/or barred by law. The Bench remarked,

If we consider the reliefs of declaration of title, recovery of possession, cancellation of revocation of Gift Deed, declaration for DGPA and Deed of Assignment-cum-DGPA, the said reliefs can be granted only if the Compromise Decree is set aside.

Dishonour of Cheque | Is it mandatory for trial court to award interim compensation under S. 143-A NI Act on mere invocation thereof? Del HC decides whether S. 143-A is directory or mandatory?