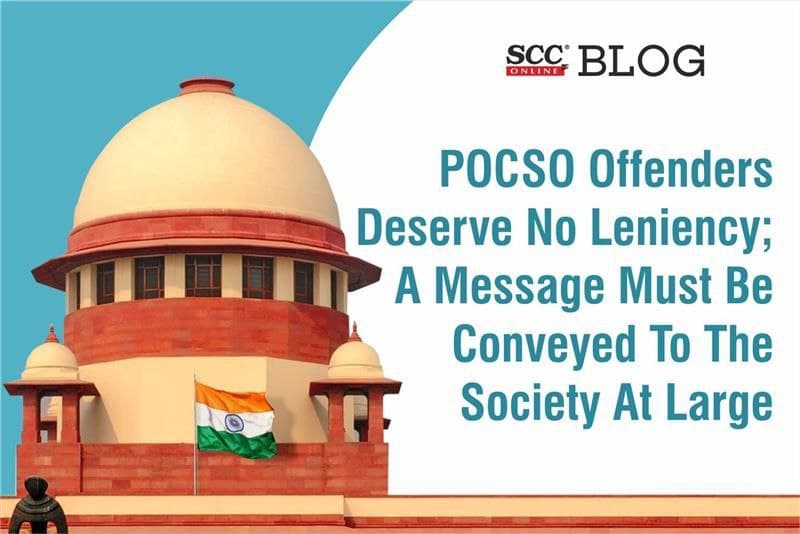 Supreme Court: In a case where a 65-year-old man committed aggravated penetrative sexual assault on his 4-year-old neighbor, the bench of MR Shah* and BV Nagarathna, JJ has observed that any act of sexual assault or sexual harassment to the children should be viewed very seriously and all such offences of sexual assault, sexual harassment on the children have to be dealt with in a stringent manner and no leniency should be shown to a person who has committed the offence under the POCSO Act.

“Children are precious human resources of our country; they are the country’s future. The hope of tomorrow rests on them. But unfortunately, in our country, a girl child is in a very vulnerable position. There are different modes of her exploitation, including sexual assault and/or sexual abuse. In our   view, exploitation of children in such a manner is a crime against humanity and the society. Therefore, the children and more particularly the girl child deserve full protection and need greater care and protection whether in the urban or rural areas.”

The Court observed that by awarding a suitable punishment commensurate with the act of sexual assault, sexual harassment, a message must be conveyed to the society at large that, if anybody commits any offence under the POCSO Act of sexual assault, sexual harassment or use of children for pornographic purposes they shall be punished suitably and no leniency shall be shown to them.

“Cases of sexual assault or sexual harassment on the children are instances of perverse lust for sex where even innocent children are not spared in pursuit of such debased sexual pleasure.”

In the case at hand the accused was aged approximately 65 year old man took advantage of  the  absence of the parents of his 4-year-old neighbor, when her mother went to fetch water and her father had gone to work, and committed aggravated penetrative sexual assault on her. The Court observed that this act demonstrated the mental state or mindset of the accused.

“As a neighbour, in fact, it was the duty of the accused to protect the victim girl when alone rather   than exploiting her innocence and vulnerability. The victim was barely a four years girl. The accused   –   appellant was the neighbour. The accused instead of showing fatherly love, affection and protection to the child against the evils of the society, rather made her the victim of lust.”

The Court observed that it is a case where trust has been betrayed and social values are impaired. Therefore, the Court was of the opinion that the accused as such does not deserve any sympathy and/or any leniency. However, the punishment provided for the offence under Section 6, at the relevant time was ten years RI and which may extend to imprisonment for life. Considering that now the accused is aged 70-75 years of age and is suffering from Tuberculosis (TB), the Court was of the opinion that if the life sentence is converted to fifteen years RI and the fine imposed by the Trial Court confirmed by the High Court to be maintained, it can be said to be an adequate punishment commensurate with the offence committed by the accused.

Chh HC | Extent of Power of Judicial Review under Art. 226 of Constitution is limited in case of ‘tender’ proceedings; Judicial restraint to be exercised in administrative matters