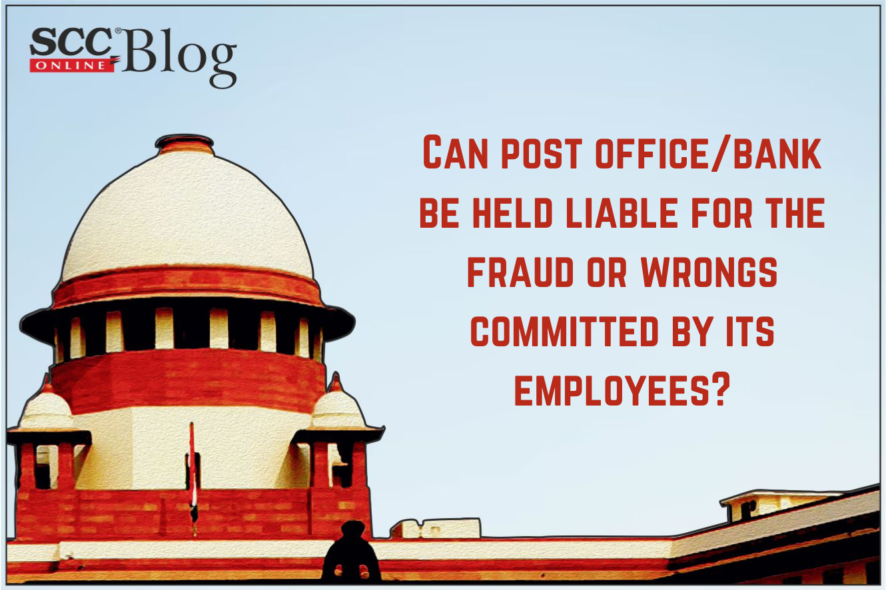 Supreme Court: The 3-judge bench of L. Nageswara Rao, Sanjiv Khanna* and BR Gavai, JJ has held that the post office/bank can be held liable for the fraud or wrongs committed by its employees.

In the case at hand, the appellants had sought transfer of their Kisan Vikas Patras from branch of the Post Office to another and they were made to believe that this transfer was not possible without the help of one Rukhsana, who convinced them that she had been working and associated with the post office for fifteen years. A sum of Rs. 25,54,000/- was paid in cash to Rukhsana, who had pocketed the entire amount. Later, the involvement of one of the Post Office Employees, one MK Singh, was alleged, who, contrary to the rules, had paid the maturity proceeds in cash and not by cheque in the names of the appellants.

Noticing that M.K. Singh is not a third person but an officer and an employee of the Post Office, the Court observed that post Office, as an abstract entity, functions through its employees. Employees, as individuals, are capable of being dishonest and committing acts of fraud or wrongs themselves or in collusion with others. Such acts of bank/post office employees, when done during their course of employment, are binding on the bank/post office at the instance of the person who is damnified by the fraud and wrongful acts of the officers of the bank/post office. Such acts of bank/post office employees being within their course of employment will give a right to the appellants to legally proceed for injury, as this is their only remedy against the post office. Thus, the post office, like a bank, can and is entitled to proceed against the officers for the loss caused due to the fraud etc., but this would not absolve them from their liability if the employee involved was acting in the course of his employment and duties.

In State Bank of India v. Smt. Shyama Devi, (1978) 3 SCC 399 held that for the employer to be liable, it is not enough that the employment afforded the servant or agent an opportunity of committing the crime, but what is relevant is whether the crime, in the form of fraud etc., was perpetrated by the servant/employee during the course of his employment. Once this is established, the employer would be liable for the employee’s wrongful act, even if they amount to a crime. Whether the fraud is committed during the course of employment would be a question of fact that needs to be determined in the facts and circumstances of the case.

The Court concluded that, in the present case, the payment was made in violation of the statutory mandate of Section 10 of the NI Act and, therefore, there is no valid discharge under clause (c) to Section 82 of the NI Act. Further, Rukhsana not being a ‘holder’, payment to her is not a valid discharge under Section 78 read with Section 8 of the NI Act. The respondents would have avoided the liability and claimed valid discharge if they had accepted the KVPs with the identity slip or if they had made payment by cross cheque, in which case, they would have satisfied the condition that they had made payment in good faith and there was no negligence, a requirement of clause (c) to Section 82 read with Section 10 of the NI Act.

Pat HC | Selection for Angan Bari Sevika based on predominance of caste, without ascertaining number of beneficiaries, defeats the purpose of ICDS Scheme