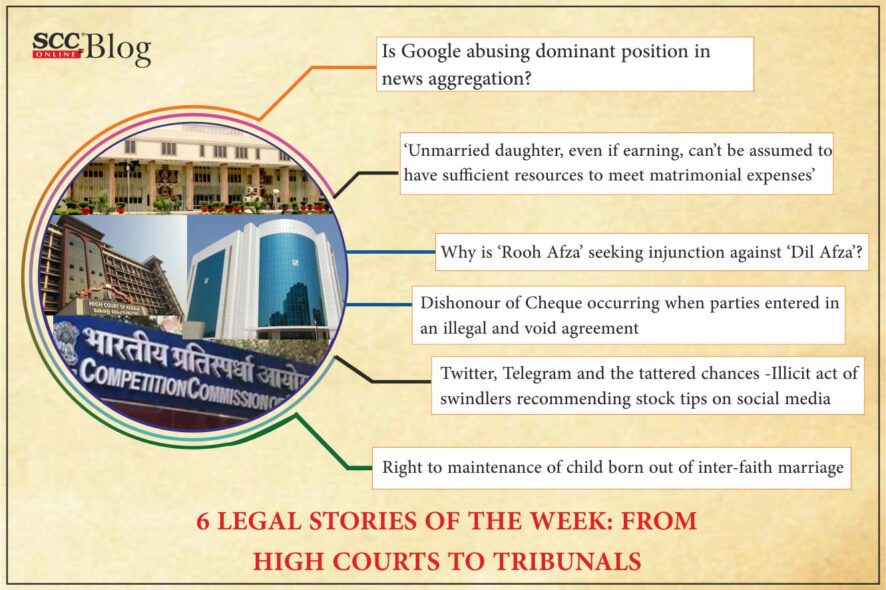 Google appears to operate as a gateway between various news publishers on the one hand and newsreaders on the other. Another alternative for the news publisher is to forgo the traffic generated by Google for them, which would be unfavourable to their revenue generation.

2. ‘Unmarried daughter, even if earning, can’t be assumed to have sufficient resources to meet matrimonial expenses’: Del HC orders father to pay marriage expenses of daughters

Kanya Daan is a solemn and pious obligation of a Hindu Father, from which he cannot renege.

An unmarried daughter, even if employed and earning, cannot be assumed to have sufficient resources to meet her matrimonial expenses.

3. Why is ‘Rooh Afza’ seeking injunction against ‘Dil Afza’? Here’s how Del HC stressed upon ‘deep emotion’ while deciding

Buying a bottle of sharbat may involve emotions, but not deep to the extent hoped for by the learned counsel for the plaintiffs. In any case, those who appreciate this deep emotion would be the first to be able to distinguish between ‘Rooh’ and ‘Dil’.

Securities Exchange Board of India (SEBI)

“…The alleged scheme of enticing and inducing others to deal in certain securities thereby creating adverse and artificial impact on the price and volume of those scrips, has been ingenuously crafted and implemented in a manner that it was an impossible task for the common investors to identify any dubious hidden intent behind such messages and tips that were being circulated amongst them through the Telegram Channel”.

5. Right to maintenance of child born out of inter-faith marriage: Is father under obligation to maintain his children even when there’s no statutory stipulation? HC answers

“There is no substantive law mandating a father of a child born out of an inter–religion marriage to maintain it. The Special Marriage Act, 1984 is silent on this.”

Court on noting the fact that the sole purpose of the agreement was to obtain a tender in favour of the complainant, not on the basis of its intrinsic merit, but on the basis of “good links” of the accused with the NTPC higher authorities. Such agreements are expressly rendered void and of no legal consequence by virtue of Section 23 of the Indian Contract Act.

“…we boast ourselves as an educated society, but we live our lives with double standards”: Allahabad HC condemns prevailing caste system even after 75 years of independence