Instant application questions the propriety, correctness and legality of the order by which the Sessions Judge CBI, Greater Mumbai, refused to discharge the applicant from the case registered against him.

Central Bureau of Investigation registered the FIR under Section 120 B read with Sections 420, 465, 467, 468, 471 of the Penal Code, 1860 on the basis of written complaint of D.G Kallatti, Deputy General Manager of Central Bank of India against Ashoka Property Developers and Ashish Communication Systems, its Directors/Guarantors and thirteen other, including two bankers and the applicant-accused 11.

Complainant alleged that the accused entered into a criminal conspiracy in the year 2001 to cheat, the Central Bank of India to the tune of Rs 17 crores by creating false and fabricated documents and further dishonestly suppressing material information, in respect of immovable properties, which were offered as collateral security either by its over-valuation or other for availing credit facilities and misutilising the same.

As per the investigation, the applicant had directed Ravikumar Bhil to open another bank account in the name of M/s Hindustan Enterprises in Indusind Bank. The said amount was used for siphoning the crime proceeds from M/s Aashish Communication Systems to the tune of Rs 80,80,000.

The four facts which were disclosed, were as follows:

(i)that though, crime proceeds were credited in the bank accounts of M/s Ahemdabad Sales Corporation, and M/s Hindustan Enterprises, these accounts were opened and operated by Mr Bhil (applicant’s employee) as per the directions of the applicant.

(ii) statement of Ravikumar Bhil recorded under Sections 169 and 164 of the Criminal Procedure Code would disclose the said fact.

Whether the above stated were grounds for proceeding against the applicant-accused?

The judge while considering the question of framing the charges under Section 227 of the Criminal Procedure Code, has the undoubted power to sift and weigh the evidence for the limited purpose of finding out whether or not, a prima facie case against the accused has been made out.

Court stated that the statement of witness recorded under Section 164 of the Code, was not substantive evidence and though it can be used only to corroborate or contradict that witness, the fact remained that, applicant was the owner of Ahmedabad Express Newspapers.

It was further added that, undisputedly, Mr Bhil was his employee. If that be so, it was inconceivable that Mr Bhil would open two bank accounts, one in the name of Ahemdabad Sales Corporation and another, Hindustan Enterprises and would receive lacs and crore of rupees, soon after, the accounts were opened.

Therefore, in view of the facts of the present matter, there was no reason to discard and disbelieve the statement of Mr Bhil, which indeed disclosed applicant’s complicity in the crime. 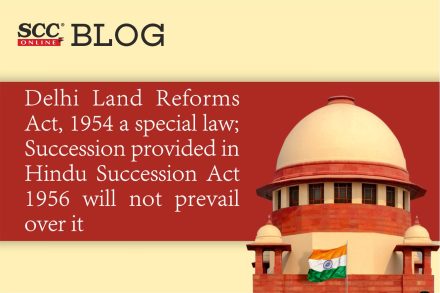 Delhi Land Reforms Act 1954 a special law; Succession provided in Hindu Succession Act 1956 will not prevail over it: Supreme Court

By Prachi Bhardwaj Published on September 21, 2022