Madras High Court: G.R. Swaminathan, J., held that irrespective of whether the proceedings under Central Act 43 of 2005 are of civil or criminal nature, the power under Article 227 of the Constitution would always lie to quash the proceedings if a case is really made out.

Instant petition was filed under Article 227 of the Constitution of India for quashing the proceedings on the file of the Judicial Magistrate.

It was contended that the above petition was an abuse of legal process, hence the present petition was filed.

Adding to the above it was stated that the petition was filed on 17-03-2021 but the Registry did not number the petition.

Hesitation of the Registry was on the account of divergent views expressed in some of the earlier orders of the Madras High Court.

Earlier, to quash the proceedings filed under the Protection of Women from Domestic Violence Act, 2005, petitions used to be filed under 482 of CrPC. This was put an end to by a Judge of this Court vide order in Dr. P. Pathmanathan v. V. Monica (2021 (2) CTC 57)

In the above decision, Court had expressed that:

“..the proceedings instituted under the Central Act 43 of 2005 are civil in nature and therefore, petition under Section 482 of Cr.P.C. will not lie to quash them. Even while laying down a set of directions indicating the remedies available to the aggrieved parties, it was also held that a petition under Article 227 of the Constitution may still be maintainable if it is shown that the proceedings before the magistrate suffer from a patent lack of jurisdiction. The jurisdiction under Article 227 is one of superintendence and is visitorial in nature and will not be exercised unless there exists a clear jurisdictional error and that manifest or substantial injustice would be caused if the power is not exercised in favour of the petitioner.”

Whereas a contrary view was adopted by Justice S.M. Subramaniam in P. Arun Prakash v. S. Sudhamary,2021 SCC OnLine Mad 1954, it was held that the proceedings filed under the Central Act 43 of 2005 before the Criminal Court can only be termed as criminal proceedings. Such proceedings cannot be transferred from a criminal Court to a civil Court by exercising the supervisory power under Article 227 of the Constitution of India.

In the present matter Court decided on the question,

Whether the impugned proceedings instituted under Central Act 43 of 2005 are civil or criminal in nature?

Bench opined that the Registry should not have kept the petition unnumbered for so long. When in view of the statutory bar set out in Section 18-A of the SC/ST (Prevention of Atrocities) Act, a petition for anticipatory bail was not numbered by the Registry of the Madras High Court, matter was taken up by the Supreme Court. In P. Surendran v. State, (2019) 9 SCC 154, it was held that:

“…act of numbering a petition is purely administrative…”

“…In this context, we accept the statement of the Attorney General, that the determination in this case is a judicial function and the High Court Registry could not have rejected the numbering…”

Hence, following the above decision, Court held that the Registry ought to have placed the papers before the Court, if it had any doubt regarding the maintainability.

Further, Court expressed that Article 227 of the Constitution of India is to the effect that every High Court shall have the superintendence over all the Courts and Tribunals throughout the territories in relation to which it exercises jurisdiction. The text of the provision is forum-neutral. It makes no distinction between civil court and criminal court. In other words, the power under Article 227 can be exercised both over civil Courts as well as the criminal Courts. While the power under Section 482 of CrPC, can be exercised only with reference to criminal proceedings before the criminal Courts, the power under Article 227 of Constitution of India is much wider and comprehensive.

High Court directed the Registry to number the petition and list the matter for admission. [Muthulakshmi v. Vijitha, 2021 SCC OnLine Mad 2183, decided on 11-06-2021]

Evidence of interested witnesses is to be scrutinized with care, cannot be rejected merely on the ground of being partisan evidence 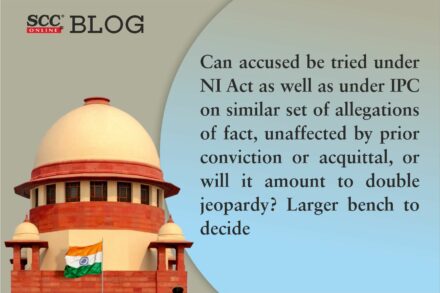 Can accused be tried under NI Act as well as under IPC on similar set of allegations or will it amount to double jeopardy? Larger SC bench to decide