The facts of the case are such that the petitioner was working in the field of journalism for the past more than 13 years as the Editor of the Hindi Weekly namely ‘Him Ujala’ circulated in Himachal Pradesh, Delhi, Uttrakhand, Uttar Pradesh and Haryana having around 6,000/- copies circulation per week. The petitioner news weekly has been given award in the field of journalism by the Government of Himachal Pradesh i.e. ‘Laghu Patrikarita ke Kshetra me Nirantar Parkashan Hetu’, yet the accreditation of the petitioner has been cancelled only on the ground that there are certain FIRs pending against him.

Counsel for petitioners Mr Ashok Kumar Thakur submitted that the impugned action on the part of the respondent-State in stopping publication of the tenders and classified ads of the government and further not renewing the accreditation of the petitioner, is a direct attack on the freedom of press which is one of the pillars of democracy and it is imperative to ensure that there is no attack on the freedom of press and, therefore, also the action of the respondents-State is illegal.

Counsel for the respondents Mr Ashok Sharma, Mr Vinod Thakur and Mr Bhupinder Thakur submitted that the petitioner’s accreditation and suspension was placed before the Press Accreditation Committee, which is the final authority as per Rule 4 of H.P. Press Correspondents Accreditation and Recognition Rules, 2002 (for short ‘the Rules’), who after scrutiny of the record decided to keep under suspension the accreditation of the petitioner till the final outcome of the criminal cases pending against him in various Courts.

The Court relied on judgment Surya Prakash Khatri v. Madhu Trehan, 2001 SCC OnLine Del 590 observed that the power of the Press is almost like nuclear power – it can create and it can destroy. Keeping this in mind, it is imperative that the owner/editor of a newspaper like a petitioner shoulder greater responsibility and in case his own conduct is under scanner, then obviously, his accreditation has to be suspended.

The Court thus held that in the instant case, the accreditation of the petitioner has simply been suspended till the final outcome of the criminal case in exercise of sub-rule (2) of 14 of H.P. Press Correspondents Accreditation and Recognition Rules, 2002. 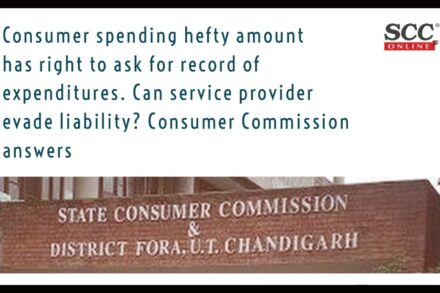 Consumer spending hefty amount has right to ask for record of expenditure. Can service provider evade liability? Read on