The Tribunal had upheld the claim of the respondent for consideration of promotion as Sub Divisional Engineer (“SDE”) in 3% disability quota under the Persons with Disabilities Act, 1995; thereby allowed the O.A. while relying on the judgment in Rajeev Kumar Gupta v. Union of India, (2016) 13 SCC 153.

BSNL contended that there was a reference made by another Division Bench of the Supreme Court regarding the judgment relied on the Tribunal. Hence, the order of the Tribunal suffered with flaws.

The Court observed that the reference had now been answered by the Supreme Court in Siddaraju v. State of Karnataka, 2017 SCC OnLine SC 1940, whereby the Larger Bench had affirmed the decision of the Division Bench. Therefore, now from promotions to vacancies, even where there is no direct recruitment, the 3% quota for disabled persons has to be complied with. The Court upheld the order of the Tribunal and directed BSNL to consider the respondent for promotion to the post of SDE on completion of three years as Junior Telecom Officer (“JTO”) w.e.f. 23-07-1996. It was further directed that promotion to the post of Divisional Engineer should also be considered on the expiry of six years from the date of notional promotion as SDE.

Counsel for BSNL, T. Sanjay sought time for the purpose of enabling the organisation to get the details of the disabled persons and consider them according to their seniority to be accommodated in the 3% vacancies on All India basis, contending that now when promotions were to be made on the basis of quota of 3% as prescribed under the Act of 1995, it had become necessary that the other disabled persons, who might be entitled to be considered, also be given an opportunity.

The Court accepted the prayer of BSNL and granted it time of four months. The Court noticed that the respondent had applied for voluntary retirement from the post of Divisional Engineer and if promotions were granted to him notionally from an earlier date, fixation of salary would have to be carried out and increments too had to be granted in the higher scale. It was held that though on such notional revision the respondent would not be entitled to any arrears of pay, the retirement benefits including any ex-gratia amounts paid in lieu of voluntary retirement, should be revised in accordance with that and the arrears if any should be paid as well. [Bharat Sanchar Nigam Ltd. v. M.G Prabhakara Panicker,  2020 SCC OnLine Ker 8664, decided on 23-01-2020]

Not open to approach M.P. Arbitration Tribunal in reference when the very same claim is already decided by Arbitrator appointed by High Court: Supreme Court 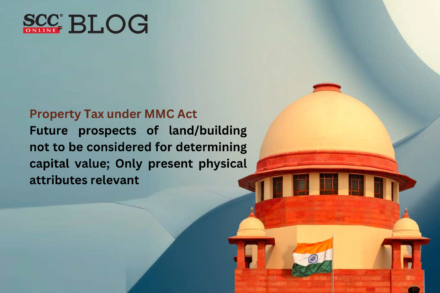 Property Tax under MMC Act: Future prospects of land/building not to be considered for determining capital value; Only present physical attributes relevant: SC

By Prachi Bhardwaj Published on November 16, 2022