Supreme Court: The 3-judge bench of Dr. DY Chandrachud*, Indu Malhotra and Indira Banerjee, JJ has held that there is no bar on granting anticipatory bail for an offence committed under the Muslim Women (Protection of Rights on Marriage) Act 2019, provided that the competent court must hear the married Muslim woman who has made the complaint before granting the anticipatory bail.

On 27 August 2020, a Muslim woman lodged a first information report, complaining of offences under the provisions of Section 498-A read with Section 34 of the Indian Penal Code and the Muslim Women (Protection of Rights on Marriage) Act 2019, alleging that in December 2019, her husband pronounced talaq three times at their house. Following this, he entered into a second marriage.

The Kerala High Court, on November 2, 2020, while declining to grant anticipatory bail observed:

“If the prosecution case is correct, the 1st petitioner is now enjoying with his second wife when the matrimonial relationship with the de facto complainant is in existence.”

However, the order of the High Court contained no reason why the appellant, i.e. the mother-in-law of the complainant, was being denied anticipatory bail.

The Court was now called upon to decide whether the High Court was right in refusing to grant anticipatory bail to the appellant i.e. the mother-in-law of the complainant.

Who is punishable for the offence of pronouncement of triple talaq?

The Muslim Women (Protection of Rights on Marriage) Bill 2019 was introduced in the Parliament to give effect to the ruling of this court in Shayara Bano v. Union of India, (2017) 9 SCC 1, and “to “liberate” Muslim women from the customary practice of talaq-e-biddat (divorce by triple talaq) by Muslim men.”

“Thus, on a preliminary analysis, it is clear that the appellant as the mother-in-law of the second respondent cannot be accused of the offence of pronouncement of triple talaq under the Act as the offence can only be committed by a Muslim man.”

Does Section 7(c) of the Act bars the power of the court to grant anticipatory bail under Section 438 of the CrPC?

Under clause (c) of Section 7, Parliament has provided that no person who is accused of an offence punishable under the Act shall be released bail unless the Magistrate, on an application filed by the accused and after hearing the married Muslim woman upon whom the talaq is pronounced, is satisfied that there are reasonable grounds for granting bail.

The statutory text indicates that Section 7(c) does not impose an absolute bar to the grant of bail. On the contrary, the Magistrate may grant bail, if satisfied that “there are reasonable grounds for granting bail to such person” and upon complying with the requirement of hearing the married Muslim woman upon whom talaq is pronounced.

Hence, though Section 7 begins with a non obstante clause which operates in relation to the CrPC, a plain construction of Section 7(c) would indicate that it does not impose a fetter on the power of the Magistrate to grant bail, save and except, for the stipulation that before doing so, the married Muslim woman, upon whom talaq is pronounced, must be heard and there should be a satisfaction of the Magistrate of the existence of reasonable grounds for granting bail to the person.

“This implies that even while entertaining an application for grant of anticipatory bail for an offence under the Act, the competent court must hear the married Muslim woman who has made the complaint, as prescribed under Section 7(c) of the Act. Only after giving the married Muslim woman a hearing, can the competent court grant bail to the accused.”

Hence, on a true and harmonious construction of Section 438 of CrPC and Section 7(c) of the Act, it was held that there is no bar on granting anticipatory bail for an offence committed under the Act, provided that the competent court must hear the married Muslim woman who has made the complaint before granting the anticipatory bail. It would be at the discretion of the court to grant ad-interim relief to the accused during the pendency of the anticipatory bail application, having issued notice to the married Muslim woman.

*Justice Dr. DY Chandrachud has penned this order. Read more about him here.

Advocates who appeared in the matter: 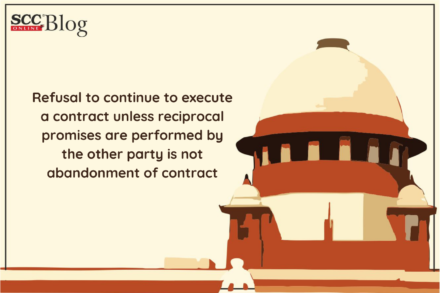 Refusal to continue to execute a contract unless reciprocal promises are performed by the other party is not abandonment of contract: SC

SC furious over non-compliance of laws and recommendations on appointment of members of SPCBs; Tells States to frame rules for within 6 months