Instant petition was filed seeking stay of operation of registration until the Rectification Application finally decided.

It was further stated that N 95 is prima facie generic term that is used to provide the quality of the masks hence it is hit by Section 9 of the Act.

Petitioner submitted that it is a company incorporated under Indian Companies Act, 1913 and was engaged in the business of manufacture and sale of a variety of goods including towels, bath linen, bed sheets, carpets, etc. ever since then under its well-known and well established trade mark SASSOON which was earlier adopted by  Surinder Prakash Gupta, earlier in 1998 for the said business under his proprietorship firm.

Further the petitioner submitted that the said generic term N95 is being used since then in relation to the respiratory mask under the trade mark SASSOON.

On 20-11-2020, the petitioner received an email from www.amazon.in informing that the petitioner’s listing of its N95 masks under ASIN No. B0898N72RN had been removed by the platform apparently on the complaint filed on behalf of Respondent 1.

In the said email it was mentioned that the trade mark no. 4487559 was being infringed.

Petitioner also submitted that on enquiry it was found that respondent 1 had frivolously and fraudulently obtained an unlawful registration of the generic term N95 in class 10.

Bench on perusal of the submissions and material placed on record stated that:

“It is the established principle that a generic expression can never be granted registration and/or protection as a trade mark under the trade mark laws.”

In Nestles’s Products (India) Ltd. v. P. Thankaraja, 1977 SCC OnLine Mad 72 , it was opined by the Madras High Court that “…”INSTEA” has the tendency to monopolise all manufactured tea which goes by the generic description of ‘instant tea’ or ‘instantaneous tea’. To grant registration to this word-mark, would therefore make its owner a monopolist of a part of the ordinary vocabulary in which traders transact business with themselves and their customers.”

In Cadilla Healthcare Ltd. v. Gujarat Co-operative Milk Marketing Federation Ltd., 2009 (41) PTC 336 (Del.) (DB), it was discussed that generic term is only entitled to protection on the ground that it had acquired a distinctive character in the minds of customers and had acquired a well known status, same will be depending upon case to case. And thus in general the generic mark is not entitled to protection.

In Jain Riceland (P) Ltd. v. Sagar Overseas, CS(COMM) 796/2016, the Delhi High Court was clear when laying down the dictum that that the generic word cannot acquire distinctiveness.

In the decision of  ITC Ltd v. Nestle India Ltd., Madras High Court  stated that the mark ‘Magic Masala’ was not a descriptor of the product but rather a laudatory expression, and the same cannot be given monopoly or protection. Further the Court had observed that the terms ‘Magic’ and ‘Masala’ are commonly used terms by different manufacturers in the packaged food industry and it would be unfair to confer monopoly over the same expression.

Board in view of the above, expressed that,

the term N95 is a generic term in the mask industry, the same is not capable of being neither registered or protected as trade mark nor the same can be appropriated by any one entity.

Term N95 serves as an indicator in the trade to designate the kind, quality, intended purpose and other characteristics of the particular product which is non-proprietary in nature. The registration of the impugned mark was thus barred under the absolute grounds of refusal under Section 9 (1) (b) of the Trade Marks Act, 1999.

In the present case, wording of N 95 in the registered mark is descriptive of a characteristic of the masks, specifically that they filter at least 95% of airborne particles and are not strongly resistant to oil is a standard and is a class of respiratory devices and thus is a generic term.

Hence, the board held that respondent 1 cannot monopolize the N 95 mark in commerce as it is a generic term that refers to the genus of which the particular product is a species.

Generic terms cannot be registered under trademark law and no protection to proprietor is provided.

The governing principle in cancellation/Rectification of registration Applications, “what is the primary significance of the registered mark to the relevant public” shall be the test for determining whether the registered mark has become the generic name of goods or services and in the present case not just the relevant public but various government authorities and institutions to refer to a particular type/standard of the respiratory mask as N95 and thus it is generic to the goods.

Further it was observed that  the Respondent does not have any bona fide intent to lawfully use the applied-for mark in commerce.

During the Pandemic COVID-19 crisis the shameless acts of the Respondent 1 in restricting the sales of the N95 Standard masks based on the Registration obtained by him would deprive the general public from accessing the N95 Masks that are declared as essential commodity by the Government.

Hence, it was held that:

“…given current public sentiment during this global public health crisis and since the dishonesty factor holds the cardinal principle until the Rectification Petition is finally decided the operation of the registration No. 4487559 in class 10 Registered under Certificate No. 1633656 shall remain stayed.”

All HC | Awareness over lockup should be the norm: Court grants stay on arrest of persons booked for violating social distancing norms while distributing food packets 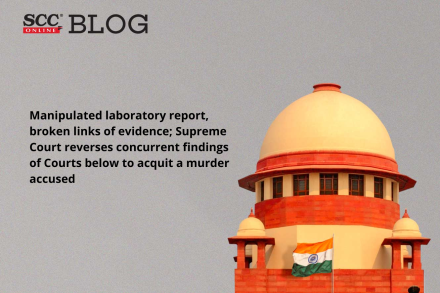 Bom HC | Whether HC should quash an FIR arising out of matrimonial dispute on ground of same being settled amicably? Gian Singh v. State of Punjab referred