Calcutta High Court: A Division Bench of Harish Tandon and Hiranmay Bhattacharyya JJ., while allowing the present appeal, discusses upon the essentials of granting an injunction order in light of the settled precedents.

The defendant in a suit for infringement of copyright has preferred the instant first miscellaneous appeal challenging the order dated 20-08-2020, passed by the District Judge at Alipore in Title Suit No. 6 of 2020. The facts leading to the present appeal are categorically mentioned hereunder;

Saptansu Basu, Senior Advocate appearing for the appellant assails the impugned order on the following grounds. Firstly, the principles laid down by Supreme Court in the case of Shiv Kumar Chadha v. Municipal Corporation of Delhi, (1993) 3 SCC 161, has not been followed by the court below while passing the ex-parte order of injunction. Secondly, no order of injunction can be passed restraining a person from instituting a proceeding before a court of law. Lastly, the respondent may, at best, be entitled to damages in the event the court finds that the notice period as mentioned in the termination letter falls short of the required notice period as per the agreement in question. Reliance was further placed on Indian Oil Corporation Ltd. v. Amritsar Gas Service, (1991) 1 SCC 533 in support of such submission.

Aritra Basu, Advocate for the respondent submitted that the agreement dated 24-11- 2017 contains a termination clause which provides that 90 days notice is mandatory before terminating the agreement by the appellant herein. It was further submitted that since the termination letter has been issued by the appellant, in violation of the said agreement, the same cannot be given effect to and the court below was perfectly justified in passing an order of injunction. Furthermore, Section 42 of the Specific Relief Act, 1963, empowers the court to grant an injunction directing the appellant to perform the negative agreement by issuing a 90 clear days notice for termination of the agreement in the instant case even if the court is unable to compel the specific performance of the agreement. Reliance was placed on the judgment of KSL Industries v. National Textiles Corporation Limited, OMP 581 of 2010 decided on 14-08-2012 and Madras High Court judgment in Base International Holdings v. Pallava Hotels Corpn. Ltd., 1998 SCC OnLine Mad 614, so to emphasize that an order of injunction can still be passed in case the notice period mentioned in the termination notice is in violation of the termination clause mentioned in the agreement.

The Court, identifying the crux of the matter, said that the agreement shall remain in existence, unless terminated by a specific notice of termination. The bench further remarked that, since the contract is determinable in nature therefore it cannot be specifically enforced in view of Section 14(1) of the Specific Relief Act, 1963.

“Section 41 of the Specific Relief Act provides that an injunction cannot be granted to prevent the breach of a contract, the performance of which would not be specifically enforced. Since we are of the view that the contract in question is one, the performance of which could not be specifically enforced, the learned judge of the court below erred in law by passing an order of injunction in the instant case which would in effect amount to directing specific performance of the said agreement. Furthermore, no injunction can be passed restraining a party from instituting any proceeding in a court of law. The resultant effect of the order of injunction passed by the learned court below is a restraint upon the appellant from initiating any legal proceedings before a court of law which is not permissible in law.”

Rejecting the submission of the respondent, the Court said, “Section 42 of the Specific Relief Act operates in a totally different field and cannot be applied to the facts of the instant case. In the event the court at the time of trial is of the view that the respondent has suffered any injury due to short notice period, the respondent may be entitled to reliefs in accordance with law but that cannot be a ground for passing an order of injunction.”

With respect to the cases referred by the counsel for the Appellant, the Court agreed that the principles laid down by the Supreme Court in the case of Shiv Kumar Chadha has not been followed as the Trial Court judge did not record reasons for its opinion while passing the order of injunction. Further, it was observed that the ratio of the other two cases, namely, KSL and Base International cannot be applied in the present factual matrix as the circumstances essentially vary. 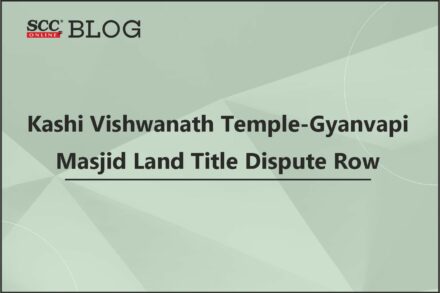 Kar HC | Sessions Court has absolutely no power to pass an order under S. 15 of JJ Act; Statutory power vested with JJ Board