Karnataka High Court: John Michael Cunha J., while rejecting the present petition, recorded no error or infirmity in the challenged order warranting interference under Articles 226 and 227 of the Constitution of India.

The Petitioner in the present case has filed this writ petition under Articles 226 and 227 of the Constitution of India, seeking to quash proceedings registered for the offences punishable under Section 120B read with Sections 409 and 420 of the Indian Penal Code, 1860, and Section 13(2) read with Section 13(1)(c) and (d) of the Prevention of Corruption Act, 1988. It is pleaded by the petitioner that, he is sought to be prosecuted for the alleged offences in his individual capacity whereas the material produced by the Investigating Agency on the face of it reveals that the entire transaction was entered into by the firm of which the petitioner was a nominal partner.

Whether the charges framed against the petitioner are valid and sustainable in the eyes of law?

The Court, pursuant to its decision, cited relevant cases and made the following observations;

Sham Sunder v. State of Haryana, (1989) 4 SCC 630, “(…)The essential characteristic of a firm is that each partner is a representative of other partners. Each of the partners is an agent as well as a principal.  He is  an agent insofar as he can bind the other partners by his acts within the scope of the partnership agreement. He is a principal to the extent that he  is bound by acts of other partners. In fact, every partner is liable for an act of the firm. Section 2(a) of the Partnership Act defines as “act of a firm” to mean any act or omission by all the partners, or by any partner or agent of the firm which gives rise to a right enforceable by or against the firm.”

Standard Chartered Bank v. Directorate of Enforcement, (2005) 4 SCC 530, “(…) The corporate bodies, such as a firm or company undertake a series of activities that affect the life, liberty and property of the citizens. Large-scale financial irregularities are done by various corporations. The corporate vehicle now occupies such a large portion of the industrial, commercial and sociological sectors that amenability of the corporation to a criminal law is essential to have a peaceful society with stable economy.”

“The Penal Code, 1860 save and except in some matters does not contemplate any vicarious liability on the part of a person. Commission of an offence by raising a legal fiction or by creating a vicarious liability in terms of the provisions of a statute must be expressly stated. The Managing Director or the Directors of the Company, thus, cannot be said to have committed an offence only because they are holders of offices. The learned Additional Chief Metropolitan Magistrate, therefore, in our opinion, was not correct in issuing summons without taking into consideration this aspect of the matter. The Managing Director and the Directors of the Company should not have been summoned only because some allegations were made against the Company.”

The Court further observed that, “The argument of learned counsel for petitioner that the contract entered into between Sri Lakshmi Venkateshwara Minerals (accused 2), of which petitioner is one of the partners, and Shree Mallikarjuna Shipping Pvt. Ltd., (accused 4) (Annexure- ‘H’) was concluded much before the seizure of the property is totally misplaced”

While dismissing the present petition, the Court said, “the allegations made in the charge sheet clearly go to show that in addition to the Firm, petitioner 1 is implicated in the alleged offences in his individual capacity as is evident from the allegations found in the charge sheet.” [K. Mahesh Kumar v. State of Karnataka,  2020 SCC OnLine Kar 1637, decided on 16-10-2020]

Once an order is found to be passed without jurisdiction, all subsequent proceedings automatically come to an end: Supreme Court 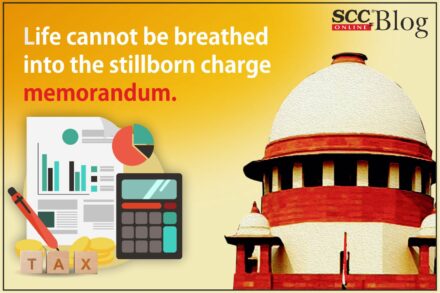 Life cannot be breathed into the stillborn charge memorandum; SC holds where prior approval is the rule the defect cannot be cured by post-facto approval