Supreme Court of the Democratic Socialist Republic of Sri Lanka: A Full Bench of Jayantha Jayasuriya, CJ and Murdu N.B. Fernando and S. Thurairaja, JJ., allowed an appeal which was filed being aggrieved by the order of the High Court in a matter of violation of fundamental rights alleging unlawful termination of employment.

The Counsel for the Employer – Respondent, relying on Section 31B (5), submitted that the Employee – Appellant can challenge the termination of his services in several forums including the Labour Tribunal, District Court and Supreme Court, but he cannot seek legal remedies from multiple forums in respect of the same issue / dispute.

The issue of law to be decided in this appeal was whether the provisions of section 31B (5) of the Industrial Disputes Act No. 43 of 1950, as amended, debar the Employee – Appellant from maintaining his application to the Labour Tribunal against the termination of his services by the Employer – Respondent claiming that the said termination of his services violated his fundamental rights guaranteed by Articles 12 (1), 12 (2) and 14 (1) (g) of the Constitution.

The Court interpreted Part IV A of the Act which contains the provisions relating to Labour Tribunals, including section 31B (5). Part IVA was introduced by the Industrial Disputes (Amendment) Act No. 62 of 1957. Part IVA initially had four sections – i.e.: sections 31A, 31B, 31C and 31D. These sections have been subjected to a few amendments since 1957. Further, new sections 31DD, 31DDD [later repealed] and 31DDDD were added to Part IVA, by other Amendments to the Industrial Disputes Act and held that,

“a workman who chooses not to avail himself of the procedure available under Part IVA of the Act in the first instance, but later realizes that he should resort to the provisions of Part IVA of the Act, should be penalized by debarring him from doing so unless he has received a determination from that other forum. I would add that debarring a workman from having access to a Labour Tribunal merely because he has, perhaps misguidedly, previously decided to refer his claim to another forum but has not received a determination from that forum, would go against the clear intention of the Legislature when it introduced Labour Tribunals in 1957.”

Secondly, it appeared that the Employee-Appellant’s fundamental rights application and his application to the Labour Tribunal sought similar substantive reliefs.

Thirdly, whether he has been subjected to unequal treatment or been denied the equal protection of the law or been made the victim of unreasonable or arbitrary or mala fide action on the part of the employer-respondent [which is said to be an organ or entity of the State]. The termination of the workman-appellant’s services is only a part of the issue before the Supreme Court and is looked at by this Court in the context of the questions described in the preceding sentence. On the other hand, the application to the Labour Tribunal will be decided solely on the core issue of whether the termination of services was just and equitable.

The Court set aside the decision of the Labour Court and the High Court and directed the Labour Court to rehear the application.[W.K.P.I. Rodrigo v. Central Engineering Consultancy Bureau, SC Appeal No: 228 of 2017, decided on 02-10-2020]

Suchita Shukla, Editorial Assitant has put this story together

3 years’ limitation period ‘unduly long’; Necessary for Parliament to fill the vacuum by prescribing a specific period of limitation under Section 11 of the Arbitration and Conciliation 1996: SC

Madras HC | Zero tolerance for Advocates’ unlawful conduct: HC to ensure that activities of some advocates do not spoil image of entire profession 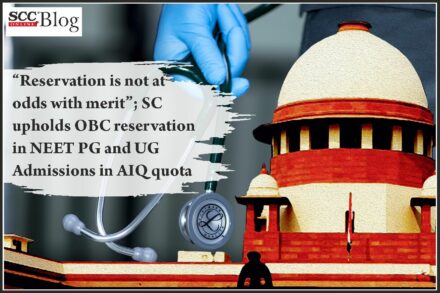 “Reservation is not at odds with merit”; Here’s why SC upheld OBC reservation in NEET PG and UG Admissions in AIQ quota