The facts of the case are such that the petitioner happened to be a Medical Officer by virtue of which he was appointed in the rural area of the State of Himachal Pradesh. An Office Memorandum issued by the Government of Himachal Pradesh, permitting employees of the Government of Himachal Pradesh to go on Extraordinary Leave subject to approval by the competent authority. In this case, the petitioner after applying for Extraordinary Leave misconducted himself by proceeding on leave without the same being sanctioned in his favour. The application also made an alternative prayer of being granted premature retirement which was rejected by the authority concerned. Due to willful absence from duty, a memorandum was issued to him. An inquiry under Rule 14 of the CCS (CCA) Rules, 1965 was proposed to be held against him. The Article of Charges framed against the petitioner were that his willful absence was in violation of Rule 3 of the CCS (Conduct) Rules, 1964 and that he was indulging in private practice at Rampur which was very unbecoming of a Government servant. The Disciplinary Authority found the petitioner to be guilty of charges. The petitioner was given an opportunity to be heard, dissatisfied by which, he was dismissed from services with immediate effect. Aggrieved by the same, an appeal was filed before the instant court which was dismissed again. Hence, the instant petition in the nature of certiorari and mandamus was filed challenging the above-aggrieved orders.

Counsel for the respondents Ajay Vaidya submitted that the Disciplinary Authority and the Appellate Authority have rightly passed appropriate orders, keeping in view the conduct of the petitioner and the report of the Inquiry Officer which established that the petitioner willfully absented himself from duty without having the approval of the same.

Courts observation on “doctrine of proportionality”

“….the doctrine of proportionality has to be taken into consideration while imposing punishment upon an employee in case he is found guilty of misconduct, but in my considered view, there cannot be any straitjacket formula in this regard and the proportionality will depend upon facts of each and every case.”

The Court in light of facts, submissions and observations held that a Medical Officer cannot be equated with any other employee and the issue of willful absence from service in the case of a Medical Officer has serious and different connotations as compared to any other employee. Hence the punishment which has been imposed upon the petitioner by the Disciplinary Authority and upheld by Appellate Authority cannot be said to be harsh or disproportionate to the misconduct of the petitioner. 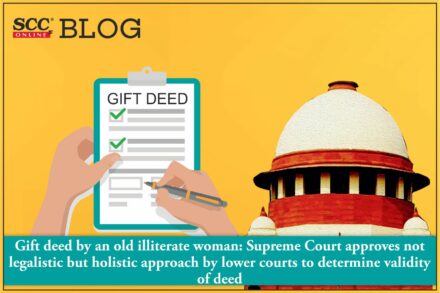 Gift deed by an old illiterate woman: SC approves not legalistic but holistic approach by lower courts to determine validity of deed. HC’s verdict set aside