An official looking circular has been doing the rounds on Twitter and other social media that the CLAT exam has been postponed from its scheduled date of September 7th until further notice. The circular dated 25th August, 2020 is allegedly signed by Prof. Sudhir Krishnaswamy, Secretary and Treasurer of Consortium of National Universities and Prof. Balraj Chauhan, Convenor of CLAT 2020. In the light of the movement to postpone the NEET exam, this circular became viral all over social media and was used as an example by students to pressurize NEET and JEE authorities to postpone their exams.

Here is the circular that became viral on social media: 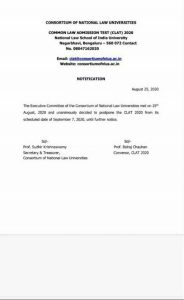 Now let us check whether this circular is genuine or not. The official website of CLAT has no notification on postponement of CLAT exam which is scheduled to be held on 7th September, 2020. There is no information of postponement on the official Telegram channel of CLAT (@officialclat2020updates) either which is usually very active with all updates. On the official CLAT website, a notification has been uploaded on 25th August, 2020 which categorically denies any change to the scheduled CLAT exam on the 7th September[1]. The notification further states it has come to the notice of the Consortium that a fake notification has been circulating and that it has not been issued by them. All official notifications can be checked on the CLAT website (https://consortiumofnlus.ac.in/). Further on, if the CLAT aspirants want to confirm or clarify any information, they can do so by writing to clat@consortiumofnlus.ac.in, the notification added.

The official notification can be read below: 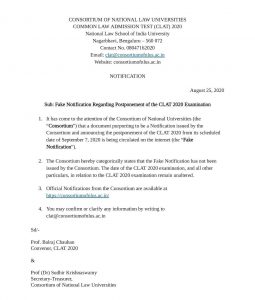 By Prachi Bhardwaj Published on August 19, 2019