A screenshot of an advisory issued by Indore DIG has been doing the rounds on social media. The order in the screenshot advises all police personnel of Indore to uninstall 52 Chinese apps on their phone from Google Play Store and Apple IOS. The order states that as per information from the Ministry of Home Affairs, there is a threat that the user’s personal and other information could be stolen by installing and using such apps.

The screenshot of the order can be seen below: 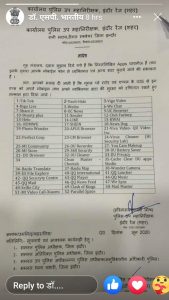 Let us check the veracity of such claims. The Times of India has reported that such an order was in fact released by the Indore DIG, however it was withdrawn a couple of hours later. The article quotes DIG of Indore Mr Harinarayan Chari Mishra stating

In the same article, IG Vivek Sharma was quoted saying that

“Such advice of technical nature is generally rendered by agencies like CERT-In. Since the order had an equivocal semblance of being directed towards the general public and not towards the closed organisational rank and file, it was recalled. Moreover, such orders of a pervasive nature are generally issued at state level after due consideration, and not by districts individually.”[2]

Therefore, we can safely conclude that the advisory being shared on social media regarding uninstalling Chinese apps was issued by DIG of Indore, however it was later withdrawn.

Nilufer Bhateja, Editorial Assistant has put this story together

MoHFW issues guidelines for domestic travel; States can develop their own protocol with regards to quarantine and isolation

Reported By Devika Sharma Published on May 25, 2020