Bombay High Court: While deciding the instant custody matter, S.C. Gupte, J., held that as per the provisions of Section 6 of Hindu Minority and Guardianship Act, 1956, it is a mother who is the natural guardian of an illegitimate child (whether boy or girl) and a father’s claim only comes in second to mother’s.

Perusing the contentions of the parties and the Order given by the Family Court, the Court observed that the petitioner could not sufficiently establish the mental instability of the respondent, as the materials presented by him does not establish the respondent’s unsoundness of mind, prima facie. Deliberating upon the validity of the Order passed by the Family Court, the Bench noted that the Family Court had correctly taken into account all the relevant circumstances and materials on record; its view is certainly a possible view, which a Court of law might well take.

The impugned Order has fairly and adequately addressed prima facie merits of the case as also the question of balance of convenience. Regarding the petitioner’s claims, the Court noted that he denied any matrimonial relationship between himself and the respondent, and thereby, legitimacy to the minor child. The child, who is a special child, has been taken care of and looked after by the respondent mother ever since his birth. It is therefore the mother who has an indefeasible legal right to his natural guardianship over the petitioner. [Dharmesh Vasantrai Shah v. Renuka Prakash Tiwari, 2020 SCC OnLine Bom 697 , decided on 09-06-2020]

BCCI Matter: Central Government permitted to suggest names for the Committee of Administrators 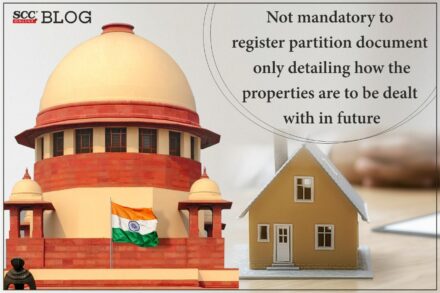 Not mandatory to register partition document only detailing how the properties are to be dealt with in future: SC