Supreme Court: After finding advocates Vijay Kurle, Nilesh Ojha and Rashid Khan Pathan guilty of levelling scandalous allegations against Justice RF Nariman and Justice Vineet Saran, the bench of Deepak Gupta and Aniruddha Bose, JJ has sentenced all 3 to undergo simple imprisonment for a period of 3 months each with a fine of Rs. 2000/-. It further said that in default of payment of fine, each of the defaulting contemnors shall undergo further simple imprisonment for a period of 15 days.

However, keeping in view the COVID-19 pandemic and the lockdown conditions, the Court directed that the sentence shall come into force after 16 weeks from the date of the order

“when the contemnors should surrender before the Secretary General of this Court to undergo the imprisonment. Otherwise, warrants for their arrest shall be issued.”

All 3 of the advocates were not willing to argue on sentence on the ground that according to them the judgment was per incuriam and they had a right to challenge the same. The Court, hence, noticed that there was not an iota of remorse or any semblance of apology on behalf of the contemnors. The Court, hence, said,

“Since they have not argued on sentence, we have to decide the sentence without assistance of the contemnors. In view of the scurrilous and scandalous allegations levelled against the judges of this Court and no remorse being shown by any of the contemnors we are of the considered view that they cannot be let off leniently.”

Background of the Contempt proceedings

The basis of the contempt proceedings was two letters dated 20.03.2019 and 19.03.2019 received by Chief Justice of India Ranjan Gogoi and other judges of the Court, admittedly signed by Vijay Kurle (State President ofMaharashtra and Goa of the Indian Bar Association) and Rashid Khan Pathan (National Secretary of the Human Right Security Council), respectively. The Court had already discharged Mathews Nedumpara last year in September, after he denied any role in sending those complaints.

It is pertinent to note that the bench of RF Nariman and Vineet Saran, JJ had barred Nedumpara from practicing as an advocate in the Supreme Court for one year, after he had argued before the Court during a proceeding :

He was referring to the judgment where with the intent to make the exercise of senior designation more objective, fair and transparent so as to give full effect to consideration of merit and ability, standing at the bar and specialized knowledge or exposure in any field of law, the 3-judge bench of Ranjan Gogoi, RF Nariman and Navin Sinha, JJ laid down elaborate guidelines for the system of designation of Senior Advocates in the Supreme Court as well as all the High Courts of India.

“The allegations are also scurrilous and scandalous and such allegations cannot be permitted to be made against the Judges of highest Court of the country.”

Holding both the complaints as ex­facie contemptuous wherein highly scurrilous and scandalous allegations have been levelled against the two judges of this Court, the Court said that though the   alleged contemnors claim that they are not expressing any solidarity with Mathews Nedumpara nor do they have anything personal against Justice R.F. Nariman, the entire reading of the complaints shows a totally different picture. 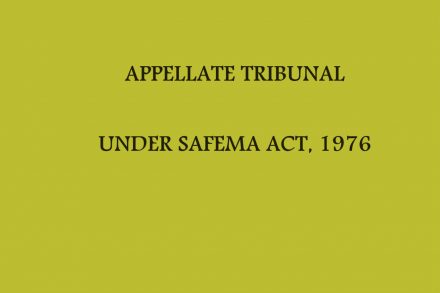 FEMA Appellate Tribunal | Delay of 370 days condoned despite not being convinced of ‘sufficient cause’ for delay, as dismissal of application would bar examination of merits of appeal