Supreme Court: Holding advocate Mathew Nedumpara guilty of contempt, the bench of RF Nariman and Vineet Saran, JJ has barred Nedumpara from practicing as an advocate in the Supreme Court for one year.

The Court had also sentenced Nedumpara to three months in jail, it, however,  suspended the sentence taking note of the unconditional apology tendered by him as also his undertaking that he will never attempt to browbeat any judge either in the Supreme Court or the Bombay High Court.

The bench, meanwhile, issued a fresh contempt notice to Nedumpara and three others for scandalous allegations against both the judges of the bench.

The Court had, on March 12, issued notice to Nedumpara after he had argued before the Court:

He also took the name of Senior Advocate Fali S. Nariman. When cautioned by the Court, he took his name again. Thereafter, on being questioned by the Court as to what the relevance of taking the name of Fali S. Nariman was, he promptly denied having done so. However, when others present in Court confirmed having heard him take the Senior Advocate’s name, he attempted to justify the same, but failed to offer any adequate explanation.

Considering that Justice Nariman is the son of Senior Advocate Fali S. Nariman, the Court said that:

“the only reason for taking the learned Senior Advocate’s name, without there being any relevance to his name in the present case, is to browbeat the Court and embarrass one of us.”

The Court also took note of various other orders that showed that it was not the first time that Nedumpara has attempted to browbeat and insult Judges of the Court. The Court said:

“In point of fact, the style of this particular advocate is to go on arguing, quoting Latin maxims, and when he finds that the Court is not with him, starts becoming abusive.”

The contempt order was issued during the hearing of a Writ Petition that sought a second review of the judgment in Indira Jaising v. Supreme Court of India through Secretary General, (2017) 9 SCC 766. On the said petition, the Court said:

“Even otherwise, it is settled law that an Article 32 petition does not lie against the judgment of this Court. We are also of the view that Section 16(2) of the Advocates Act, 1961 is a provision which cannot be said to be unconstitutional and the designation of Senior Advocate cannot be as a matter of bounty or as a matter of right.”

Also read the guidelines issued by the 3-judge bench of Ranjan Gogoi, RF Nariman and Navin Sinha, JJ for the system of designation of Senior Advocates in the Supreme Court as well as all the High Courts of India

Officials making arrests under scrapped S. 66A of IT Act will be sent to jail: SC tells Centre

By Prachi Bhardwaj Published on January 7, 2019 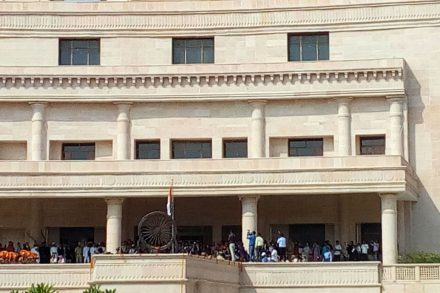