Supreme Court: Holding the Government Office Ms. No.3 dated 10.1.2000 issued by the erstwhile State of Andhra Pradesh providing 100% reservation to the Scheduled Tribe candidates out of whom 33.1/3% shall be women for the post of teachers in the schools in the scheduled areas in the State of Andhra Pradesh, unconstitutional, the 5-judge bench of Arun Mishra, Indira Banerjee, Vineet Saran, MR Shah and Aniruddha Bose, JJ has held that there was no rhyme or reason with the State Government to resort to 100% reservation.

“It was least expected from the functionary like Government to act in aforesaid manner as they were bound by the dictum laid down by this Court in Indra Sawhney and other decisions holding that the limit of reservation not to exceed 50%.”

The Court noticed that a similar G.O. was issued by the erstwhile State Government of Andhra Pradesh in the year 1986, which was quashed by the State Administrative Tribunal, against which an appeal was preferred in this Court, which was dismissed as withdrawn in the year 1998. After withdrawal of the appeal from this Court, it was expected of the erstwhile State of Andhra Pradesh not to resort to such illegality of providing 100% reservation once again.  But instead, it issued G.O. Ms. No.3 of 2000, which was equally impermissible, even if the A.P. Regulation of Reservation and Appointment to Public Services Act, 1997 would have been amended, in that event also providing reservation beyond 50% was not permissible.

Agreeing to the apprehensions of the appellants that the State may again by way of mis­adventure, resort to similar illegal exercise as was done earlier, the Court directed the State of Andhra Pradesh to not exceed the limits of reservation in future. It said,

“In the peculiar circumstance, we save the appointments conditionally that the reorganised States i.e. the States of Andhra Pradesh and Telangana not to attempt a similar exercise in the future. If they do so and exceed the limit of reservation, there shall not be any saving of the appointments made, w.e.f. 1986 till date.”

It, further, held that the conditions of eligibility in the notification with a cut­off date, i.e., 26.1.1950, to avail the benefits of reservation, were also unreasonable and arbitrary.

The Court also answered, in detail, the questions relating to scope of power of the Governor. Here’s a summary of the other questions referred to and answered by the Court:

Scope of paragraph 5(1), Schedule V to the Constitution of India:

Under Para 5(1), Fifth Schedule of the Constitution, the Governor can:

Under Para 5(1), Fifth Schedule of the Constitution, the Governor can:

direct that any particular Act of Parliament or the Legislature of the State, shall not apply to a Scheduled Area or apply the same with exceptions and modifications.

make a provision within the parameters of amendment/modification of the Act of Parliament or State legislature.

Does the power to make new laws extend to subordinate legislation?

No, the power does not extend to subordinate legislation, it is with respect to an Act enacted in the sovereign function by the Parliament or legislature of the State which can be dealt with.

Can the exercise of the power conferred Under Para 5(1), Fifth Schedule of the Constitution override fundamental rights guaranteed under Part III?

The power is subject to some restrictions, which have to be observed by the Parliament or the legislature of the State while making law and cannot override the fundamental rights guaranteed under Part III of the Constitution.

Does the exercise of such power override any parallel exercise of power by the President under Article 371D?

No, the Governor cannot override the notification issued by the President in the exercise of powers under Article 371D. The power has to be exercised harmoniously with such an order issued under Article 371D, not in conflict thereof.

Will a partition deed effected subsequent to commencement of the Urban Land (Ceiling and Regulation) Act prevent vesting of land with the State? SC decides 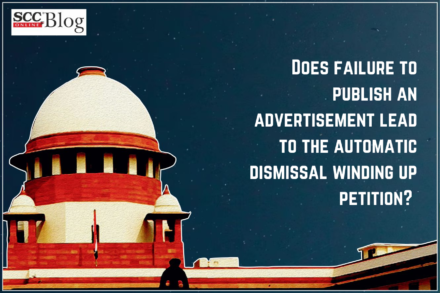 Explained| Does failure to publish an advertisement lead to the automatic dismissal winding up petition?