The COVID-19 pandemic forced the Central Government on 24-3-2020 to issue a lockdown order under the Disaster Management Act, 2005 imposing a 21-day lockdown of the entire country as a preventive measure to stop the spread of COVID-19 wherein commercial establishments have been directed to be shut.

COVID-19 scenario has also generated a lot of discussion among practitioners and academicians on how will it impact the contracts specifically from the perspective of invoking force majeure clauses under the executed contracts, if there exists a clause to that effect or otherwise whether a party can resort to Section 56 of the Contract Act, 1872 (“the Contract Act”) to invoke frustration.

The parties need to be careful before terminating lease deeds as in the event the Court/arbitrator decides that the termination was wrongful then the party who has terminated the lease deed may have to pay damages for wrongful termination.

DOCTRINE OF FRUSTRATION AND ITS APPLICABILITY TO LEASE DEEDS

In the event there is no force majeure clause specified in a contract, then the parties normally resort to the doctrine of frustration which is embodied in Section 56 of the Contract Act to see whether it can be applied to argue that the contract has become impossible to perform. However, the question that arises for consideration is, can the parties resort to such a mechanism for lease deeds.

The Supreme Court was dealing with this issue in Raja Dhruv Dev Chand v. Raja Harmohinder Singh[1] where the Court was called upon to decide on whether Section 56 of the Contract Act is applicable when the rights and obligations of the parties have been enshrined under a lease deed. The three- Judge Bench of the Supreme Court speaking through Shah, J. held that frustration won’t apply to lease deeds. The Court went on to observe as follows: (SCR para 17)

“17. Under a lease of law there is a transfer of right to enjoy that land. If any material part of the property be wholly destroyed or rendered substantially and permanently unfit for the purpose for which it was let out, because of fire, tempest, flood, violence of an army or a mob, or other irresistible force, the lease may, at the option of the lessee, be avoided. This rule is incorporated in Section 108(e) of the Transfer of Property Act and applies to leases of land, to which the Transfer of Property Act applies, and the principle thereof to agricultural leases and to leases in areas where, the Transfer of Property Act is not extended. Where the property leased is not destroyed or substantially and permanently unfit, the lessee cannot avoid the lease because he does not or is unable to use the land for purposes for which it is let to him.”

Subsequently, the Supreme Court in Sushila Devi v. Hari Singh[2] followed the principle laid down in Raja Dhruv Dev Chand[3] and went on to hold that Section 56 of the Contract Act only applies to a contract. The Bench of the Supreme Court speaking through Hegde, J. observed as follows: (SCC para 8)

“8….Section 56 applies only to a contract. Once a valid lease comes into existence the agreement to lease disappears and its place is taken by the lease. It becomes a completed conveyance under which the lessee gets an interest in the property. There is a clear distinction between a completed conveyance and an executory contract. Events which discharge a contract do not invalidate a concluded transfer — see Raja Dhruv Dev Chand v. Harmohinder Singh[4]. In view of that decision the view taken by some of the High Courts that Section 56 of the Contract Act applies to leases cannot be accepted as correct.”

“(e) if by fire, tempest or flood, or violence of an army or of a mob, or other irresistible force, any material part of the property be wholly destroyed or rendered substantially and permanently unfit for the purposes for which it was let, the lease shall, at the option of the lessee, be void:

Provided that, if the injury be occasioned by the wrongful act or default of the lessee, he shall not be entitled to avail himself of the benefit of this provision;”.

Accordingly, in the absence of a force majeure clause, a lessee would have to demonstrate and comply with the threshold provided in the Transfer of Property Act which can be argued to be much higher than the threshold set out under the Contract Act.

In the present scenario, it has to be demonstrated by the lessee in the absence of a force majeure clause cumulatively that COVID-19 and/or its consequences would qualify as an irresistible force and that material part of the property has been wholly destroyed or rendered substantially and permanently unfit for the purposes for which it was let out.

Lessors/landlords should also be pragmatic while dealing with requests for rent suspension/ reduction taking into account practical exigencies and circumstances to avoid disputes which can be avoided and amicably resolved between the parties.

**Satish Padhi, Senior Associate, Khaitan and Co. (Disclaimer: Views are personal and cannot be attributable to the Firm.) 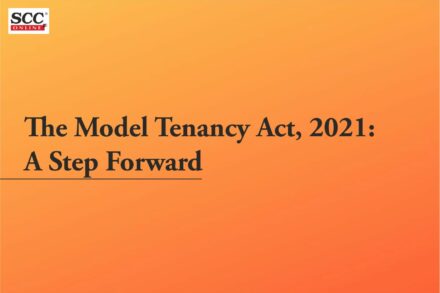 AOR Examination 2021 | Rescheduled dates notified; Candidates to intimate Registry whether they have been administered both doses of COVID-19 vaccine