Calcutta High Court: A Division Bench of Sanjib Banarjee and Kausik Chanda, JJ., granted bail to a rape accused taking note of the submission that the accused and the victim intend to get married in immediate future.

The accused claimed that though the alleged victim was a minor when the accused may have had sexual relationship with her, the victim has now attained majority. It was submitted that the accused and the victim intend to get marry in the immediate future.

Considering this submission, the High Court granted bail to the accused, subject to the Investigating Officer satisfying himself upon conversing with the victim as to her understanding of the situation.

It was further directed that in the event the marriage does not take place within the next 3 months or there is any further complaint from the victim against the accused within 6 months of the marriage, the bail may be annulled.

Subject to the above, the accused was directed to be released on bail upon furnishing a security bond of Rs 10,000 and producing a personal release bond of equivalent value. [Sopikul, In Re, 2020 SCC OnLine Cal 838 , decided on 16-4-2020] 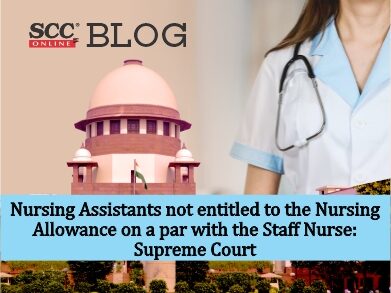 Nursing Assistants not entitled to the Nursing Allowance on a par with the Staff Nurse: Supreme Court