Bombay High Court: K.R. Shriram, J., dismissed a criminal appeal filed against the order of the trial court whereby it had acquitted the accused of charges under Section 138 (dishonour of cheque) of the Negotiable Instruments Act, 1881.

As per the complainant, she had given a loan of Rs 4.5 lakhs to the accused, for repayment of which, he had issued a cheque in favour of the complainant. However, on presenting the cheque for encashment, it was dishonoured. Per contra, the accused took the stand that the cheque in question was given to one Sanjay, who was a former business partner of the accused. The cheque was given to Sanjay to be handed over to a third party to connect with a mutually agreed transaction. However, subsequently, disputes arose between the accused and Sanjay. It was submitted that the Sanjay and complainant were very close friends and lived in the same house. The accused submitted that Sanjay dishonestly handed over the blank cheque in question to the complainant and fraud was being played upon him.

The High Court perused Section 138 (dishonour of cheque) along with its Explanation and noted that the keyword “legally enforceable debt or other liability”. Similarly, discussing Section 139 (presumption in favour of the holder), the Court noted that the presumption is rebuttable and the onus is on the accused to raise a probable defence.

The Court then reproduced the principles summarised and enumerated by the Supreme Court in Basalingappa v. Mudibasappa, (2019) 5 SCC 418, and observed that the standard of proof for rebutting the presumption is that of the preponderance of probabilities and not beyond a reasonable doubt. It was also noted as settled law that Section 139 imposes an evidentiary burden and not a persuasive burden.

On the factual score, it was found that there was no evidence as to when the amount in question was handed over to the accused. No receipts were produced. Also, there was no evidence to show that the complainant had Rs 4.5 lakhs to give to the accused, and it was also admitted that she was not even paying income tax. Moreover, the fact of the dispute between Sanjay and the accused was also admitted. All this, according to the High Court went on to prove that the accused had raised a probable defence that the complainant had not proved that there was a legally enforceable debt or other liability.

Accordingly, finding no fault with the order of the trial court, the High Court dismissed the present appeal and upheld the acquittal of the accused. [Tasneem Murshedkar Mazhar v. Ramesh, 2020 SCC OnLine Bom 20, decided on 02-01-2020]

CESTAT | Can refund claim be denied on the ground that freight had not been included in the assessable value? Tribunal answers 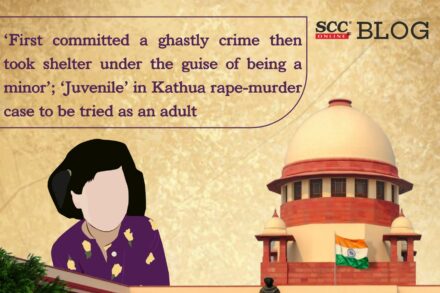 ‘First committed a ghastly crime then took shelter under the guise of being a minor’; ‘Juvenile’ in Kathua rape-murder case to be tried as an adult: SC