CBI had registered a case on 28.03.2018 U/s 448/302/201/328/376/511 & 34 of IPC against unknown persons on the request of Jharkhand Government and further Notification from Government of India. The case was earlier registered on 16.12.2016 at Sadar Police Station, Ranchi and later handed over to CID of Jharkhand. It was alleged that on 15/16.12.2016, the victim, an Engineering Student of 4th Semester of an Engineering College, Ormanjhi, Ranchi who was alone in her house at Booty Basti, Ranchi, was found dead. On the fateful day i.e. on 16.12.16, in the early morning, the elder sister of the victim who was with her parents at Barkakana District Ramgarh tried to contact the victim on her mobile, however, when she did not get any response from the victim, she called up a neighbour to check. The lady neighbour, who was previously their tenant at Ranchi, visited the victim’s house and saw that the victim was found lying dead in her room. As soon as the news regarding rape/ murder of the victim spread, the students of the said Engineering College reached the place in the college buses and demanded immediate justice for the victim. The students also held a candle march. The movement of students of said Engineering College was also joined by other colleges and also supported by others including the local public.

CBI took over the investigation of the case from the State Police and found that one person namely Rahul Kumar who was living nearby areas two-three months ago from the date of occurrence and then left the place. During further investigation, it was found that Rahul Kumar, a resident of Dhurgaon, Distt: Nalanda(Bihar) was absconding. He had hidden his identity and used his name as Rahul Raj @ Aryan @ Rocky Raj @ Raj Srivastav @ Amit @ Ankit. After sincere efforts, he was traced. He was earlier arrested by Uttar Pradesh police. After taking production warrant, Rahul was produced from Lucknow Jail and remanded in this case. The accused was examined and his blood sample was obtained for DNA examination. The DNA profile of Rahul Kumar was matched with the deceased.

After thorough investigation, CBI filed a Charge Sheet in the Designated Court on 13.09.2019 against accused Rahul Kumar. The Court framed charge against the accused on 25.10.2019. Prosecution evidence started from 08.11.2019. During a very short period of about 16 days, all 30 prosecution witnesses were produced and examined by CBI. 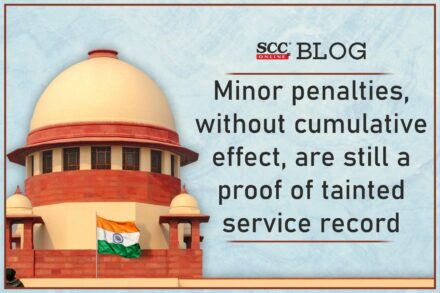 Minor penalties, without cumulative effect, are still a proof of tainted service record; Benefit of Selection Grade can’t be claimed as a right: SC