Supreme Court: In yet another historic verdict, the 5-judge constitution Bench of Ranjan Gogoi, CJ and NV Ramana, Dr. DY Chandrachud, Deepak Gupta and Sanjiv Khanna, JJ has held that the office of the Chief Justice of India comes under the purview of the Right to Information. In the 250-pages long judgment, Justice Sanjiv Khanna wrote the mjority opinion for the Bench and Justices NV Ramana and DY Chandrachud gave separate but concurring opinion.

On the relative scope of both the provisions, the Court said,

“the scope of ‘information’ under Section 11 is much broader than that of clause (j) to Section 8 (1), as it could include information that is personal as well as information that concerns the government and its working, among others, which relates to or is supplied by a third party and treated as confidential. Third-party could include any individual, natural or juristic entity including the public authority.”

The Court said that the public interest test in the context of the RTI Act would mean reflecting upon the object and purpose behind the right to information, the right to privacy and consequences of invasion, and breach of confidentiality and possible harm and injury that would be caused to the third party, with reference to a particular information and the person.

Some of the important aspects highlighted by the Court are as follows:

The independence of judiciary is not limited to judicial appointments to the Supreme Court and the High Courts, as it is a much wider concept which takes within its sweep independence from many other pressures and prejudices. It consists of many dimensions including fearlessness from other power centres, social, economic and political, freedom from prejudices acquired and nurtured by the class to which the judges belong and the like.

The Court said that it cannot be doubted and debated that the independence of the judiciary is a matter of ennobled public concern and directly relates to public welfare and would be one of the factors to be taken into account in weighing and applying the public interest test. Thus, when the public interest demands the disclosure of information, judicial independence has to be kept in mind while deciding the question of exercise of discretion. It, however, said,

“we should not be understood to mean that the independence of the judiciary can be achieved only by denial of access to information. Independence in a given case may well demand openness and transparency by furnishing the information.”

The Court concluded by saying that in each case, the public interest test would be applied to weigh the scales and on balance determine whether information should be furnished or would be exempt. Therefore, a universal affirmative or negative answer is not possible. However, independence of judiciary is a matter of public interest.

The Court upheld the 2010 Delhi High Court verdict where it had directed the CPIO, Supreme Court of India to furnish information on the judges of the Supreme Court who had declared their assets. The Court said that such disclosure would not, in any way, impinge upon the personal information and right to privacy of the judges.

“Right to information should not be allowed to be used as a tool of surveillance to scuttle effective functioning of judiciary.”

Stating that transparency cannot be allowed to run to its absolute, considering the fact that efficiency is equally important principle to be taken into fold, Justice Ramana talked about a 2-step process to ascertain whether the information should be disclosed. He laid down non-exhaustive lists of considerations that need to be considered while assessing both the steps

First Step: Whether information is private or not

Second step: Whether the public interest justifies discloser of such information under Section 8(1)(j) of the RTI Act

Though Chandrachud, J noticed that to be independent a judge must have the ability to decide ‘without fear or favour, affection or ill will’ and that the Constitution creates conditions to secure the independence of judges by setting out provisions to govern appointments, tenure and conditions of service, he, however, said

He further said that the judiciary, like other institutions envisaged by the Constitution, is essentially a human institution. The independence of the judiciary was not envisaged to mean its insulation from the checks and balances that are inherent in the exercise of constitution power.

Jha HC | Mere absence of a ticket with the deceased will not negative claim of being a bonafide passenger, Court reiterates 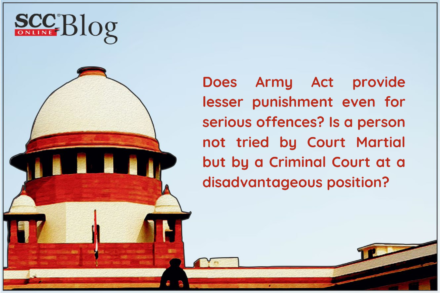 Explained| Does Army Act provide lesser punishment even for serious offences? Is a person not tried by Court Martial but by a Criminal Court at a disadvantageous position?