United Kingdom Court of Appeal (Civil Division): A 3-judge Bench of Sir Terence Etherton MR, Lord Justice Stephen Irwin and Lord Justice Rabinder Singh allowed an appeal from an order of the Divisional Court of the Queen’s Bench concerning the lawfulness of a grant by the UK Government of export licenses for sale or transfer of arms or military equipment to the Kingdom of Saudi Arabia, for possible use in conflict in Yemen.

The case describes a background for the arising conflict in Yemen. Central and Southern Yemen has been in the control of Houthi rebels for which the UN passed Security Council Resolution affirming the legitimacy of President Hadi and condemning actions by Houthis. An appeal was filed by ‘Campaign Against Arms Trade’ (hereinafter “CAAT”) contesting the grant by the UK government of export licenses to be indiscriminate and to be violative of UN treaties, Geneva Conventions and other humanitarian laws.

Issues: The following questions of law were dealt with during the trial:

The principles of international humanitarian law which were brought into light for contesting violation and abuse of the same were as follows: Four Geneva Conventions of 1949 which include obligation to take feasible precautions in attack, advance warnings of attacks which may affect the civilian population, protection of objects indispensable to civilian population, prohibition of indiscriminate and disproportionate attacks, attacks directed against civilian objects and/or civilian targets. The principle of distinction prohibiting attack on civilians and principle of proportionality prohibiting attack on military despite knowing that injuries would be caused to civilians is brought to light to question the acts of Secretary of State.

The appeal, argued by Martin Chamberlain, was contested on four grounds. Ground one suggested that evidence showing Secretary of State’s consideration of Saudi Arabia’s past and present record with respect to International Humanitarian Law (hereinafter, IHL) depicted a pattern of violations. Secondly, Secretary of State failed to answer the fundamental matters in user’s guide which pertains to prosecuting violations of IHL. Thirdly, it is contested that the Divisional Court adopted an incorrect approach to the standard of review. Fourthly and lastly, it was argued that the Divisional Court had failed to answer questions pertaining to breach of the Geneva Conventions.  The Secretary of State, on the other side, quoted the UK-Saudi diplomatic relations to defend any violations of IHL.

The Court elaborated on principles of law and mechanism pertaining to judicial review. It stipulated that it is not the function of the Court to adjudicate on underlying merits. If however, in the present case, the Secretary of State would have erred as a matter of law in the approach taken to the assessment of those merits, it would be the role of the Court to do so. The principal error of law which was alleged to be committed by the Secretary of State was that he acted irrationally in the process which he adopted in order to make the assessment for granting arms to Saudi Arabia. The Court held that for assessing ground one in the appeal the only legal error which is alleged to have been committed is founded on the public doctrine of irrationality. Reliance was placed on Secretary of State for Education and Science v. Tameside Metropolitan Borough Council, [1976] 2 All ER 665 where it was held that the duty is to take reasonable steps to acquaint oneself with the relevant information in order to assess.

The general principles as elaborated by the Court were as follows: (i) obligation lies on the decision-maker is to collect reasonable information; (ii) it is for the public body and not the Court to decide upon the manner and intensity of enquiry to be undertaken; (iii) Court should not intervene merely because it considers that further enquires would have been sensible or desirable; (iv) decision-maker should establish what material was before the authority and should only strike down a decision not to make further enquiries if no reasonable authority possessed of that material could suppose that the enquiries they had made were sufficient; and (v) decision-maker must call for his own attention to considerations relevant to his decision.

Ker HC | Any acknowledgment voluntarily signed towards some payment, attracts presumption under S. 139 of NI Act; acquittal set aside 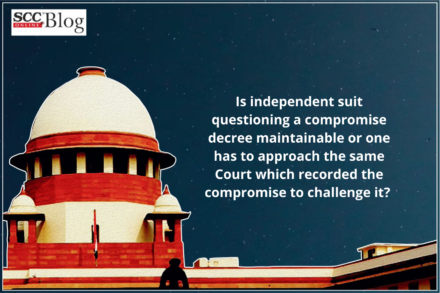 Is independent suit questioning a compromise decree maintainable or one has to approach the same Court which recorded the compromise to challenge it? SC answers

Denying interim relief will cause trauma to people who pre-booked the hall; Bombay High Court grants relief to marriage hall owner despite his failure to comply with Maharashtra Pollution Control Board’s directions